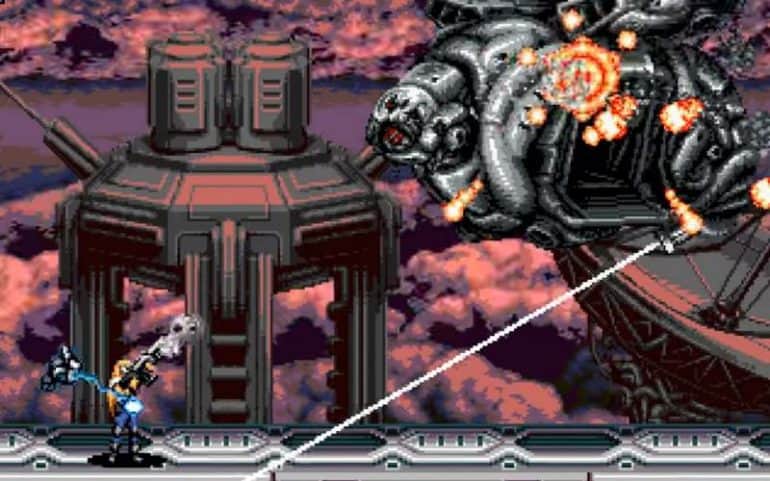 If you’ve been hankering for a new run and gun to get stuck into then rejoice as Blazing Chrome has just been released.

Blazing Chrome has just arrived from Joy Masher and looks stunning with its classic 2D pixel graphics that will instantly take you back to the 90’s whether that was playing Metal Slug in the arcades or at home with Super Probotector (Contra) on the SNES , Gunstar Heroes on the Megadrive or Turrican on the Amiga..

We reckon that these classics have influenced this game.

What’s The Story in Blazing Chrome?

Blazing Chrome is set in a world in the future where robots have taken control and humanity is on the cusp of extinction. You take control of some super hard nut characters to take on the robot overlords and gain freedom from them.

You take control of a human or a robot to rid the world of the robots by blowing lots of stuff up and taking on some heavy duty bosses over five levels all to a classic soundtrack that fits in perfectly with the action, which you can also play locally with a mate as well.

This game is pure 90’s and graphically it looks like it could be at home on the Sega Saturn or Neo Geo quite easily with some great sprite scaling effects that could easily be mistaken for these systems and that’s the point!

The bosses are varied and large and there’s tons of over the top explosions and lush backgrounds that keep your eyes firmly placed on the screen.

Don’t believe us? Check out the launch trailer below and see it with your own eyes!

When is it Available?

Blazing Chrome has literally just come out so you can get it now on PC (via Steam or GOG) PS4, XBOX One and of course for those that like to play on the go, the Nintendo Switch and will be a must have for any run and gun and Retroheadz out there.

The question remains, is it good enough for you? Let us know what you think in the comments below.