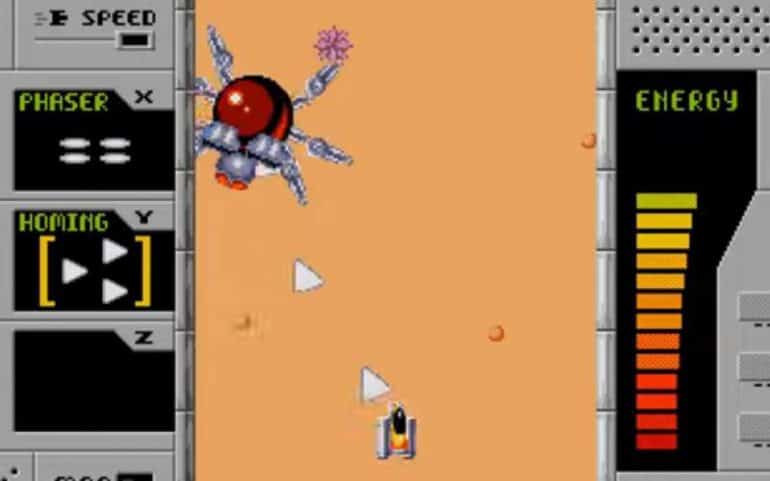 Arakgis Revolution, a brand-new Mega Drive shoot ‘em up from Argentinian developer SIK is on its way and it looks pretty awesome.

The game is an overhead shooter that uses SNES style Mode 7 rotation to huge effect, something that wasn’t thought possible on Sega’s legendary console as it doesn’t have a dedicated graphics chip that could do what the SNES was capable of.

Arkagis takes place in the year 2612 and tasks you as a rebel pilot who takes on the United Space Colonies who came to free Arkagis from a dictator and then became one too.

The rebels of Arkagis have a secret ship that they use to take on and defeat the USC and gain freedom for the colony.

The game is played overhead and looks and feels a bit like another Mega Drive game called Subterrania or it might just remind you of the overhead parts of Super Probotector/Super Contra on the SNES.

How does it look and play? Take a gander for yourself.

What Else Does Arkagis Revolution Include?

Along with cutscenes and a ton of speech (76 seconds worth) Arkagis Revolution also has a password save game feature, 3 and 6 button controller support (even keyboard and mouse) and a 28 page manual, options to change the language (English, French and Spanish) and difficulty, speed settings and even left handed mode.

The single player game comes on a region free cartridge and there will also be a ROM version to play on emulators too.

You can find out more about Arkagis by visiting the games website here.

When is Arkagis Revolution Out & How Much Will It Cost?

Pre-orders are available as of now, however they have stated that due to the outbreak they can only get them ready to ship as of now.

What do you think of Arkagis Revolution? Will you be getting it for your collection? Let us know in the comments below.