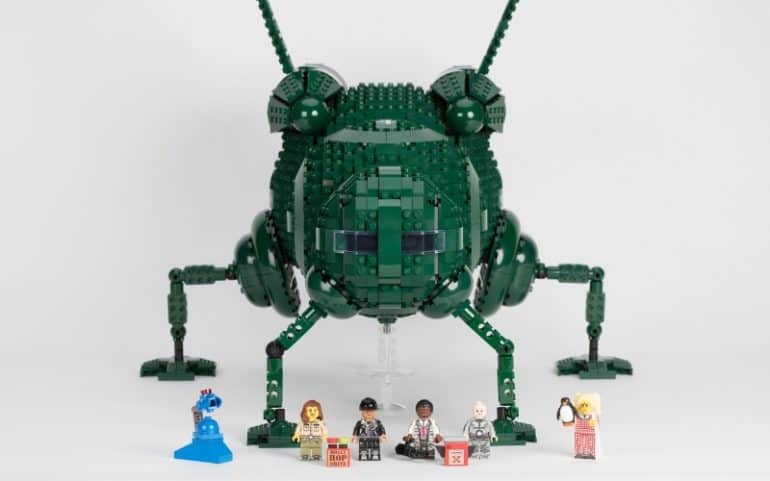 The accurate and fun looking recreation of the iconic spaceship has been submitted to the Lego Ideas by Bob Turner who also goes under the Twitter name of Bob’s Vintage Bricks.

The Red Dwarf Lego set has already gathered close to 1800 supporters since it went live on the site on January 15th 2020.

If enough support is given by users then there is a chance it will become an official Lego set.

The Lego Starbug ship has a cockpit and internal features that are referenced from multiple series of Red Dwarf and add fun details that fans of the show will love. They include:

No Lego set would be complete without some Lego mini figures.

Here’s Starbug and the Red Dwarf crew in more detail.

What Went Into Making Starbug?

The build of Starbug started at the tail end of June 2019 and was completed at the end of December and was all done in Bob’s spare time.

Bob had to get creative and was given pieces of the dark green Lego from other custom builders in the Lego community.

The spheres that make up the main body of Starbug came from a Lego Star Wars BB-8 Droid set and from that Bob gutted and tweaked the set until it looked and functioned exactly as he envisioned.

We asked Bob how many pieces of Lego are required to build Starbug which he is currently working out.

Currently Bob is designing the instructions for building Starbug and will know how many pieces are required once this is done.

However, given its impressive size it looks like it will be a fun and challenging build for Red Dwarf fans big and small.

The odds of something like becoming an official Lego set are in the hands of voters and after that licensing between Lego and the rights holders of the Red Dwarf brand.

However, with the Red Dwarf feature length episode/movie coming out in 2020 it makes it an ideal time to push this through so if you’re a fan of Red Dwarf and love a bit of Lego you can head over the Lego Ideas page and cast your support.