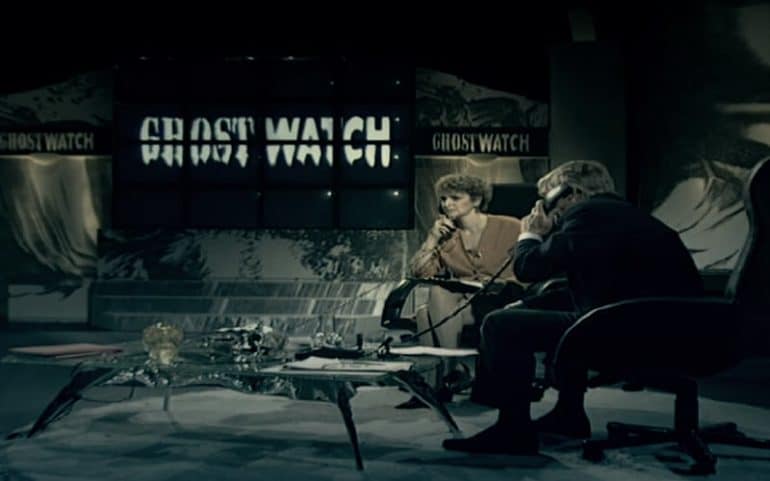 Ghostwatch: The Halloween Special That Terrified A Generation

Ghostwatch was shown on BBC 1 on the 31st October 1992 and most of us were never the same again.

Television networks have been trying to scare people since they began. Often the results would be laughably cheesy or so serious they just seemed boring. So what made Ghostwatch any different?

Sit back, or rather find something to hide behind as we take you through some of the elements that made this show a horrifying spectacle that scarred a generation of children and adults alike.

It was hosted by Michael Parkinson, Sarah Greene, Craig Charles, Mike Smith and Gillian Bevan all of whom made it seem completely real.

The inclusion of Michael Parkinson was inspired. He was a serious journalist who tackled serious issues and interviewed politicians and world leaders, he didn’t get involved in spoof documentaries.

Sarah Greene was also incredibly popular at the time as a former Blue Peter presenter and a host of Going Live.

Mike Smith was a popular Radio 1 DJ who had presented the coveted Breakfast show slot.

Craig Charles just cemented the team and was infinitely believable, seeing him “genuinely” scared was disturbing when we were used to seeing him in Red Dwarf as a joker.

The premise of the show was that they would visit Britain’s most haunted home and broadcast live from the house for the whole of Halloween night.

The property in question was a typical suburban house, just like the ones we all lived in. It was set in Northolt, Greater London and it really did look like any normal home.

The home was said to be haunted by a poltergeist that the family had named “Mr Pipes”.

The family also had photos of the poltergeist after it had possessed items like curtains and pillows in the children’s bedrooms.

These were actually some of the scarier bits of the show as the photo’s made the objects look like a deformed person.

To a young viewer, this was just too much but we didn’t stop watching it.

Mr Pipes also used to rattle the central heating, which is how he earned his name. Again, this was something we could all relate to and it, no doubt, caused many parents to bleed their radiators soon after watching.

As the show progressed Sarah Greene followed paranormal activity as it happened around the house.

This ranged from simple things like the pipes knocking to far more menacing events. Pictures would fly off of the walls and the figure of a man would appear on the stairs.

Another aspect that made the show that bit more terrifying was that it was filmed on VHS instead of the standard cameras of the time.

We may be familiar with that ploy now thanks to The Blair Witch Project and similar “home video” horrors but at the time it was ground-breaking.

In case you still need a reminder here’s a clip to chill the bones.