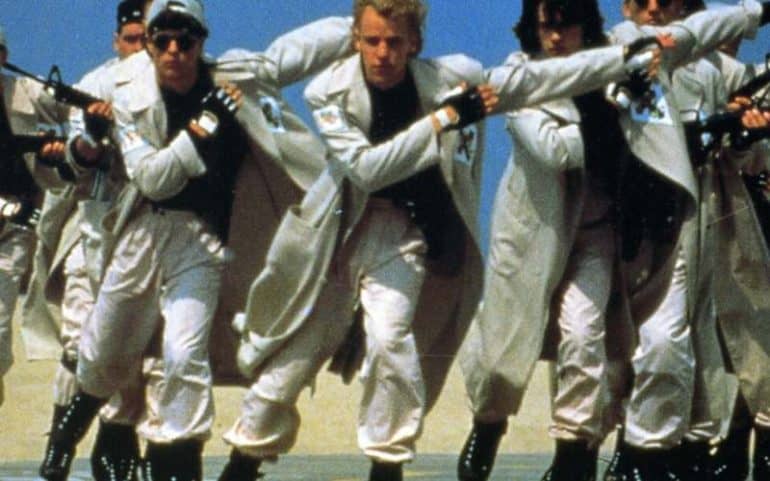 Back in the 80’s Corey Haim was the poster boy who ruled supreme with movies such as Lucas, The Lost Boys and License to Drive being must watch movies for kids and teens everywhere.

His movies were fun and entertained us immensely with their mix of comedy and action they captured the zeitgeist of the time and are mostly considered classics and rightly so.

Prayer of The Rollerboys however took things in a different direction.

Gone was the comedy and in was something a bit more serious that gave us a vision of a near future America in economic turmoil and the rise of far right gangs that started to take over and it was all done in a visually engrossing style and bar a few minor acting issues was a decent Sci-Fi movie aimed at young adults that deserves your attention again.

What’s Prayer Of The Rollerboys About?

Prayer of The Rollerboys is set in L.A. in the near dystopian future where the US has crashed economically.

Poverty and homelessness are rampant throughout as the country’s assets are brought up by Japan and other countries leaving the population to fish for scraps and try to survive.

Corey Haim plays Griffin, a well-meaning teenager who works as a pizza delivery driver to help earn money for him and his little brother Miltie and live in a tent on their friend Speedbaggers land.

When he was delivering pizza’s one night he see’s a house on fire and stuck in it is one of the Rollerboys, a gang that is made up of the abandoned and homeless kids who are the result of the financial crash.

Griffin drives into the house and frees the Rollerboy who makes a run for it and Griffin gets in to trouble with the Police who told him it was a Mist house which is a factory for producing the designer drug that the Rollerboys have the franchise for.

The Rollerboys are ruled with an iron fist by the charismatic Gary Lee (Christopher Collett). He hears about the good deed that Griffin did and in a stylish way goes and meets him and offers him a place in his gang after it turns out that they used to be childhood neighbours before the crash.

Griffin wanting a quiet life of skating and paying his way declines but the under resourced police see him as an opportunity to infiltrate the gang and pressgang him in to doing it.

The Day of The Rope

They have a cult like following where Gary Lee delivers sermons to their followers who all chant the mysterious ‘Day of the Rope’ saying which turns out to be an added ingredient in the drug that will make users impotent which in their minds will make a pure race which they believe will make America rise again.

Griffin with the help of undercover police officer Casey (played by Patrica Arquette) enters the murky world of the Rollerboys and rises up the ranks to ultimately get on the Mist production line and let the police finally catch them red handed and take it off the streets for good.

What About The Rollerblading?

Griffin is of course an awesome Rollerblader in the movie and most of the action pieces centre on blading and are awesome to watch when you consider this was a sport in its infancy.

From the MTV style opening sequence where Griffin in pulling off some impressive tricks to the initiation through a secure harbour to act as a diversion so the Rollerboys can steal guns to the finale where Griffin and Gary Lee have it out in a disused factory.

The skating is one of the main reasons why many of watched the movie as Rollerblades were pretty unknown back in 1990 and it showcased the emerging sport in a stylish and engrossing way.

It was and still is a fantastic showcase for Rollerblading which at the time was marketed for keep fit fanatics. Prayer of the Rollerblades made it cool and alternative just like Skateboarding is.

The movie made Rollerblading futuristic but not in a way that felt it was light years away, oh no, it was coming soon, and this movie made you want to get a pair on and hammer it around an urban landscape and listen to Nine Inch Nails and pretend that you are indeed, Griffin.

Frankly, it still evokes that just like when you watch a Kung Fu movie and still try and do the moves after you’ve finished watching it, well, I still do anyway!

Prayer of The Rollerboys has that early 90’s film vibe to it, with pastel sunsets and scenes that have an orange filter over it giving it a cool MTV kind of look. It looks the part and is backed by a great soundtrack featuring Nine Inch Nails that only emphasises its coolness.

Considering this movie is coming up to 30 years old (I know, that’s scary huh!) it still looks good but you do have to remember that this is made in 1990.

However, Prayer of The Rollerboys did win two Saturn awards for best performance from a young actor (Corey Haim) and Best Sci-Fi movie and frankly I can agree with these awards being given at the time.

The movie also covers pressing social issues of the time such as race and drugs and does it in a mature way. Not bad for a teen movie at all.

Getting Hold of Prayer of The Rollerboys

Here’s the difficult bit, it has never been on any streaming service in the UK (come on Netflix, pick it up!) and getting hold of it on DVD is costly with copies going on eBay of up to £50.

Even an oldskool VHS copy can command £30 but with that you’ll probably have an ex-rental copy with loads of cool old trailers on it which will be even more nostalgic.

However, if you really want to see it, every now and again someone seems to upload it on to YouTube so check there out first.

This lack of availability only adds to its allure and for us it’s a cult classic not just because of this but because its an awesome movie that deserves a watch again and at just under 90 mins that’s not a lot of time to invest in a classic like this is it?

Just be careful when you rush out on your skates again after watching Prayer of The Rollerboys again!