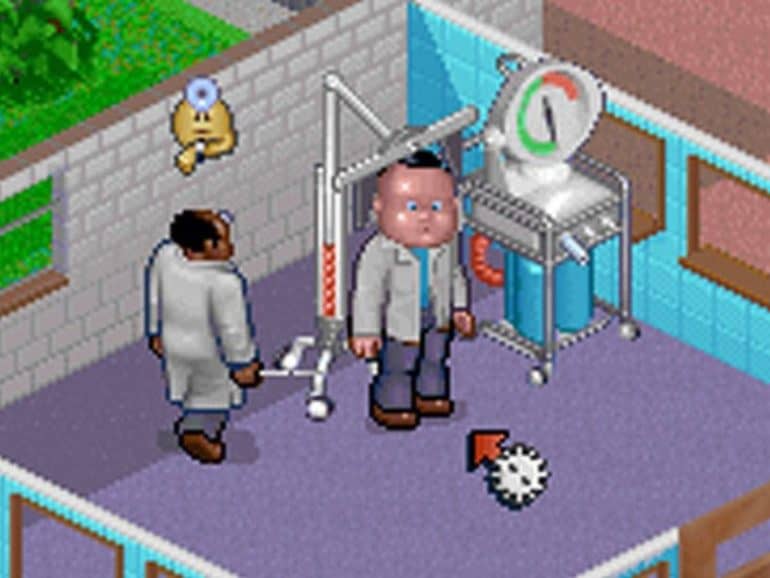 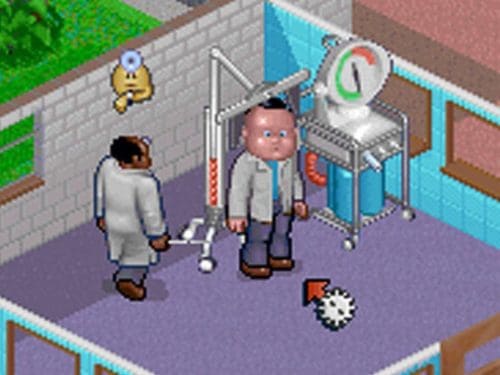 Theme Hospital came out on the PC way back in 1997 and was a huge hit for Bullfrog at the time and rightly so it was a deep and fun game to play.

As soon as the game starts you find yourself in the role of a director/supervisor of a local hospital, the game is based on business stimulation.

The main aim of Theme Hospital is to develop, design and maintain a hospital to maximise efficiency and to keep death rates low and your profits high.

If you succeed you can move onto a bigger and better hospital. The game was thematic to Theme Park, Bullfrog Productions earlier game.

It sounds pretty simple but it’s far from it. You aren’t faced with traditional tonsillitis like sicknesses but ‘Bloaty Head’, ‘Slack Tongue’ and ‘Invisible Man Syndrome’. You need to research the symptoms and develop cures to succeed. Keeping up with the large crowds of illness that come into your hospital takes a good amount of strategy and coordination.

Made for the PC and later moved to the PlayStation. Graphics were nowhere near as high res as you’d see today, however, they were clear and defined. Doctors, nurses, receptionist, janitors and patients all had their own distinct set of animations.

Fortunately, the sound is just as dazzling, with every sound you could predict from inside a hospital such as vending machines, filing cabinets, pool tables, toilets, x-ray machines, computers, sliding doors and people throwing up, it’s all there.

Fortunately, the sound is just as dazzling, with every sound you could predict from inside a hospital such as vending machines, filing cabinets, pool tables, toilets, x-ray machines, computers, sliding doors and people throwing up, it’s all there.

Plus, the announcer on a loudspeaker constantly pulling doctors and nurses from one department to another and voila, the whole experience becomes very authentic.

If you are doing a bad job it becomes harder and harder to treat all of the patients coming in.

Eventually, you could find yourself with a grimy hospital, piled with sick, overflowing bins, grubby toilets, broken equipment, striking staff and if you haven’t treated your patients quick enough then you will even be visited by death himself.

Theme Hospital can become more difficult as the player goes up the career ladder but the overall concept stays simple. The simplicity of the game is what works here, though, it creates a very addictive formula.

A lot of the time problems can be solved quickly, such as raising the employee’s salary if they threaten to strike and building more rooms if the patients have nowhere to go.

The biggest flaw with the game seems to be the lack of variety. Each hospital is larger but pretty much recycles the last challenge, with little difference. The awards given are almost always identical too.

With only a few minor drawbacks Theme Hospital is a very addictive game still to this day. If you like racing or fighting games Theme Hospital might not be for you and if you already have the PC version stick with that.

However, if you enjoy strategy games you’d probably want to give Theme Hospital a try again but bear in mind this game is over 20 years old but if you want to go back to that carefree time then you’ll have fun doing it again.

Next Up: If you liked the Theme series of games then check out our review of Zoo Tycoon here.