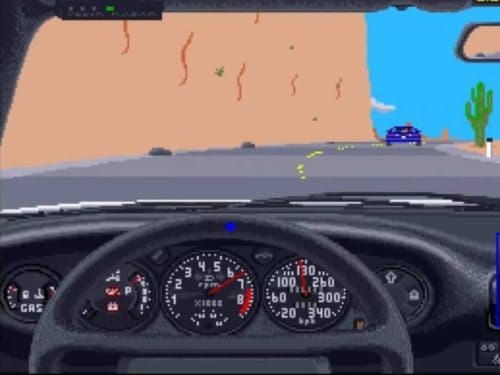 Test Drive perfectly summed up the 80’s when it came to kids living the dream of driving the cars on their bedroom wall and not only in one 80’s Supercar but a choice of five to drive as hard and fast as you could to make it to the next stop.

Test Drive was from Accolade, who when loading the game tell you it’s presented by them (speech was a huge thing back then) you get to see a RayBan wearing character, driving side on in an 80’s super car with the window down.

This sets the scene perfectly and sums up the type of person you’re going to be to drive these cars in real life.

Moving on from the intro players then get to choose your car and it looks awesome.

You can choose between a Lotus Turbo Esprit, Porsche 911 Turbo, Corvette, Ferrari Testarossa and the ultimate 80’s scissor door pin-up the Lamborghini Countach and petrol heads got to look at the stats on the car, from top speed, 0-60 and even the tyre pressure.

Stats fans and Petrolheads have a Smorgasbord of info to drool over.

Doesn’t sound much now but back in 1987, no one had done this and set the tone that actually this is a serious simulation for serious gamers.

The driving takes place in the car which was a first, each of the cars cockpit is based on the real cars, the Corvette’s digital dashboard looks great as you race up through the revs and the Porsche’s iconic steering wheel is replicated in pixelated glory as is the Testarossa cockpit.

When you shift gears there’s a cutaway showing the gear changes as you speed along the road.

Each car sounds different which at the time was as realistic as it could be but not so much today.

Still its nice to max your iconic vehicle at 160 mph.

The driving itself takes place on a mountain road, on one side is a cliff face that will mash up your windscreen if you veer into it and the other is a drop off the side and the same result applies here.

You have two lanes to play with and this means overtaking and watching out for oncoming traffic which happens frequently, especially when overtaking.

Like all exotic 80’s cars, owners were crazy to have one if you didn’t have a radar detector.

These illegal detectors indicate in advance that there was a police car nearby measuring the speed of passing motorists.

Not that the beep, beep, beep is going to stop your hurtling along at breakneck (and broken windscreen) speeds as the patrol car will very rapidly be in the rear view screen (another nice touch by the way).

If you do get caught and get handed a speeding ticket which is a nice touch.

Each section of mountain road is measured and when you finally stop at the petrol station you’re given an overview of how fast you went and what time you did it in.

And that’s about it, the fact that you could choose your car was amazing back then and the in-car perspective was fresh and exciting as well.

Has Test Drive stood the test of time? Well no, not really but it’s definitely worth going back to just to remember how much fun you had with it back in the day and how much things have progressed and again whilst simpler graphically.

The Commodore 64 version is worth a load as well although bear in mind if you decide to change the car, you’ll have to rewind the tape and hope for the best.

Remember Test Drive? What car was your vehicle of choice? Let us know in the comments below.

Up Next: OutRun Arcade Retro Review. Is this ultimate 80’s arcade racer?

Test Drive (1987) – Amiga Retro Review
Is it worth playing again?
Test Drive is one for die hard fans of the series for anyone else you probably won't think much of it.
Graphics
66
Sound
75
Gameplay
68
Classic Factor
82
Reader Rating3 Votes
86
Good Bits
It felt as real as it could be back in the day
Great presentation of the cars to choose from
Bad Bits
It's easy to miss the pitstops
While a great sim back in the day it hasn't aged well graphically
73
Retroheadz Score