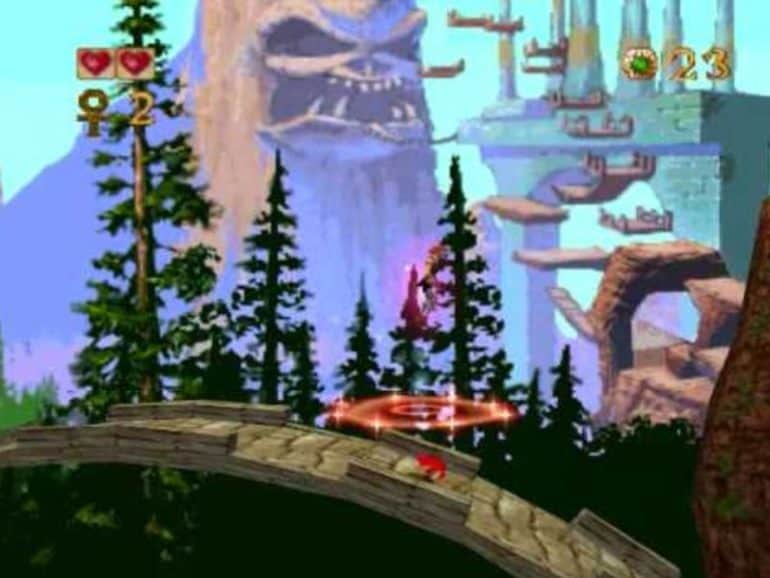 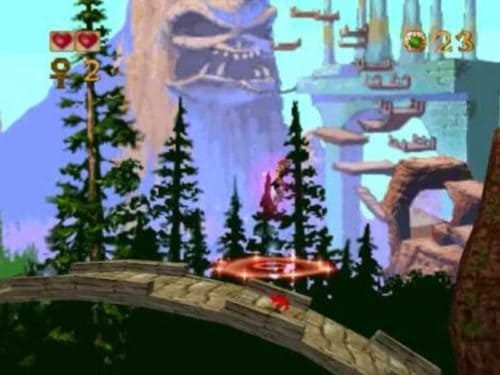 Pandemonium! came out back in 1996 for PlayStation and was developed by Toys for Bob and published by Crystal Dynamics. It was also available on the Sega Saturn.

Nikki, the flexible acrobat, and Fargus, the jester with a stick puppet call Sid are tired of their carnival life and decide to attend a ‘Wizards in Training’ seminar at Lancelot Castle. After bumping into each other at the seminar, Nikki and Fargus decided to follow Vu, the speaker, who drops an ancient book from his backpack. The book came with a few warnings but the pair ignored them and cast spells anyway. On the 10th spell, a green monster called Yungo appears and eats the village in one mouthful.

The aim of the game is to send the monster, Yungo, back to his own dimension. Though it is quite easy to forget the aim of the game when you’re indulged in collecting gems and having to restart the same level over and over again. You know how it is, getting stuck in the same place because there’s that one part in the game that you just can’t get past.

Before the game begins, you get to choose which character you want to play as. Did you choose Fargus, the jester with a stick puppet called Sid? Or Nikki, the flexible acrobat?

The interesting camera angles in the game certainly make it more exciting, or in some views quite risky and frustrating. In the first level of the game, the camera prevents the player from seeing safety. We’re used to dying if we have to jump off a ledge, but in this case there’s no harm in doing that at all. You just have to know about it or take the risk.

One of the best levels would have to be level 2, Hollow Stairway. You get to run all the way to the top of the spiral stairway, perhaps going the quick way if you know where to jump, and then get chased by huge spikes. Will you make it to the bottom again and beat the level? Most likely if you don’t stop moving.

Pandemonium! holds small exciting elements. The power-ups would be one of the best things in the game as it gives you more control over defeating your enemies. You might pick up a blue ball, which means you can freeze enemies and then crush them. Or perhaps a green one which gives you the ability to shrink enemies. It’s the little things that make this game so awesome.

The graphics bring the game to life. It’s full of colours in each level and the characters themselves add colour to the mix too. The scenery is beautiful and it makes you feel as though you’re in a completely different place each time. Admittedly, some of the graphics do look quite old and unrealistic but hey! Overall they’re pretty good. The graphics mixed with the cool tunes that just won’t get out of your head will have you hooked.

Don’t be fooled into thinking this is an easy game because there’s definitely lots of tricky patches waiting to trip you up. With the variety of levels, choice of characters and beautiful scenery you’re bound to love this game – even if it is an oldie!

If you want to give this game a go and don’t own it already, you’re in luck because at the time of this article it’s still available to buy for around £10-£15 on eBay. It’s worth getting if you want to try this game for the first time or take a step back into the past and replay.