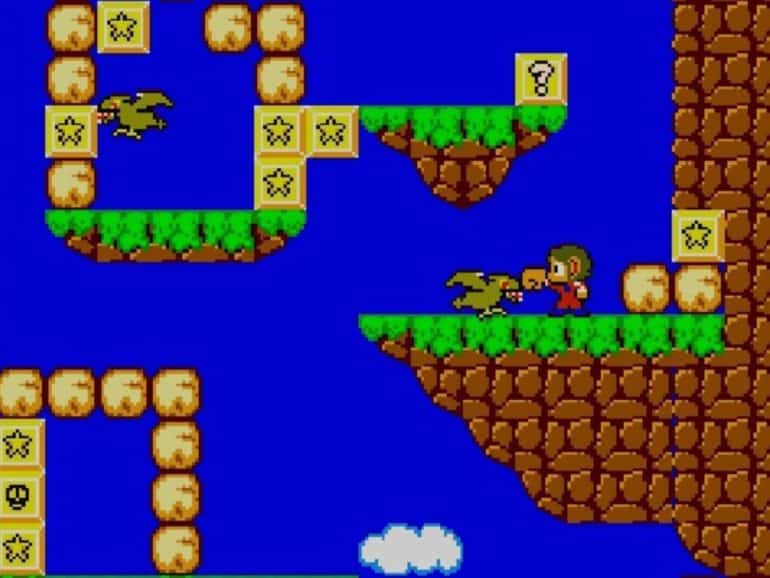 Ah, the Sega Master System, so many games and not enough time or nagging power to parents back in the day to get them all but if you were one of the kids who had the round edged Master System 2 then there is one game that everyone will know so well, yep, it’s Alex Kidd in Miracle World, the built-in game that loaded up when there wasn’t a cartridge in the slot, let’s look back at it.

First things first, as you may remember, upon switching the Master System on your treated to this…

Whoops, now you’ve got the insanely catchy title music stuck in your head (for at least the next couple of weeks), we’ll talk about Alex Kidd and the game itself.

Alex Kidd in Miracle World is the first in a series of Alex Kidd games. It was Sega’s official mascot until the spiky haired blue one (that’s Sonic the Hedgehog if you weren’t sure) hit the Sega systems and overnight took over this role right up to now.

The game originally came out way back in 1986, a year after Nintendo released the superb Mario Bros on the Famicom, in Japan and Nintendo Entertainment System in the West.
It plays similarly to this as in it’s a scrolling platformer but it did have some unique moments and its own unique graphical style as well as that…music!

You have to punch your enemies rather than jump on them. There are also levels where you get to swim, drive a speedboat and ride a motorbike which was definitely fresh back then.
Naturally, with Miracle World, there were some nice touches such as visiting a shop between levels as well to power up which you’ll need because as with all games from this era, it was hard. You have three lives and if you use them all it’s game over so we remember getting to know the first couple of levels pretty well.

So how does it play today? Well, not too bad for a game that’s now over 30 years old, it’s still hard but we knew that anyway and if you want to reminisce and play it again there’s a whole heap of ways to play it.

If you want to get the true feel for it then eBay will be your friend here, there’s lots of Master Systems for sale there so you should be able to bag a bargain and you’ll probably bag a whole load of other games at the same time. If you one of the current consoles, then their marketplaces are a good place to look too.

So Alex Kidd, we salute you as you were there in times of boredom and were always there by default. We couldn’t ask for more!

Finally, if you want more Alex Kidd then here’s a nice full play gameplay video and yep the catchy music is still there. If you wake up at 3am with it stuck in your head on an endless loop then if it’s any consolation, you’re won’t be alone!