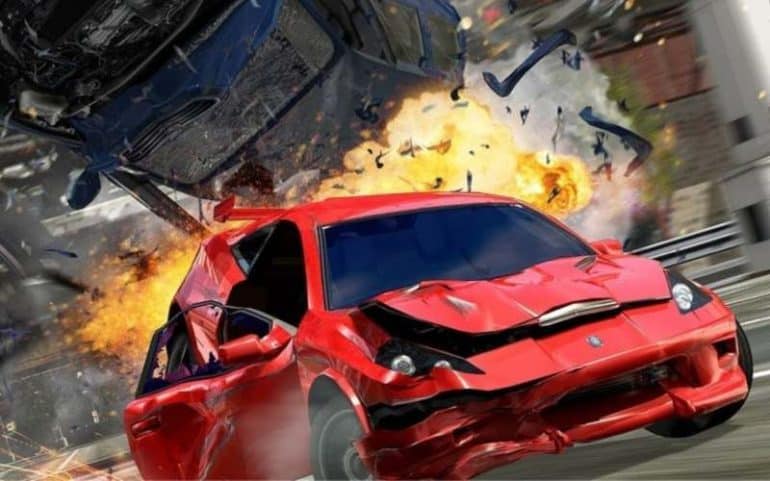 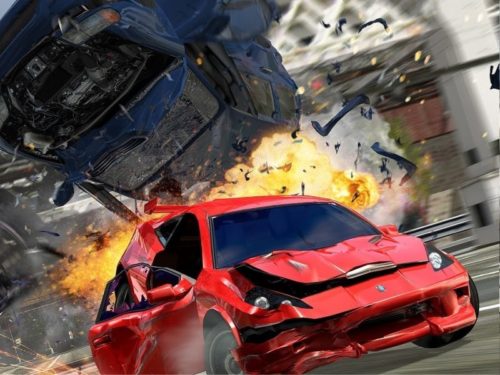 If you ask anyone who played the Burnout series they will tell you that Burnout 2 was amazing, but Burnout 3: Takedown was just an all around improvement and the peak of the series.

Everything from the new after touch mechanic after totalling your car to try and cause even more damage, to the excellent soundtrack EA chose, it’s superb.

There was nothing more satisfying than being in a race, pit manoeuvring another driver into a wall and seeing him crash in slow motion and being rewarded with a boost bar almost the size of your whole screen!

Whoever decided that Burnout 3 needed more take downs and crashes than the previous games, was a genius and we hope he got a promotion.

Speaking of Crashing, Burnout 3: Takedown had “Crash events” which could involve speeding towards intersections (Crash Junctions) with the intention of causing as much damage as possible to get a gold medal

Theses event in my eyes had an aspect of puzzle about it as you had to use ramps optimally and collect the correct pickups to increase your score.

You would then be shown a sweeping shot of all the destruction you’ve caused.

Another crash event had you speeding around a track at high speeds with many other cars, seeing who could get the most brutal take downs before your car completely degraded and you could not cause havoc any longer.

This game knew what was fun, and gave it to you. Without limits.

When you think of Burnout, you should think of this game.

To make it even better, this was in the age before EA would charge you micro transactions at every opportunity.

You just unlock cars and progress naturally as you complete races and events, as you should!

Is Burnout 3 Worth Playing Today?

Burnout 3: Takedown – PlayStation 2 Retro Review
Is it worth playing again?
Overall Burnout 3: Takedown is a classic racing/driving game that should always be remembered and gone back to for years to come. Go digging in the loft, find this game and give it another boot.
Graphics
85
Sound
80
Gameplay
95
Classic Factor
85
Reader Rating1 Vote
98
Good Bits
So much destruction!
Party crash mode is so much fun
Bad Bits
Erm...None really
86
Retroheadz Score