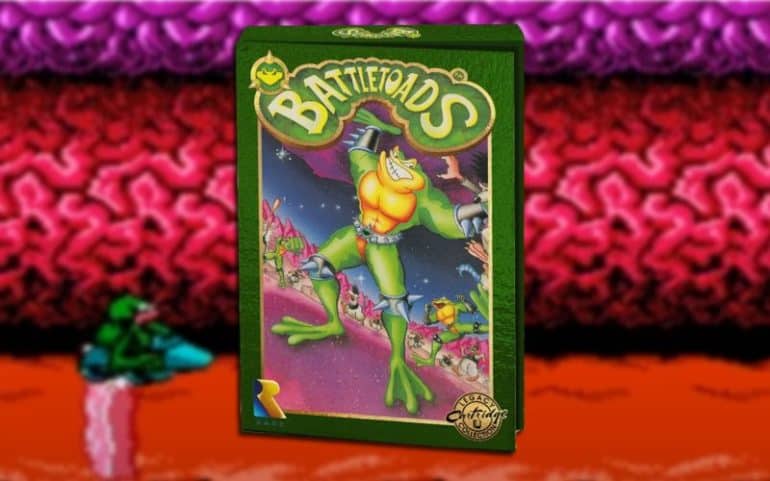 Battletoads on the NES is a game that many people still talk about today both fondly and in frustration.

Fondly, because it’s a stunning game from Rare and captured the zeitgeist of the Battletoads craze of the time and frustratingly because it was so darn hard in places that completing it is no doubt a bucket list goal of many a NES retrogamer.

If you missed out on the classic the first time around and want to play it on original hardware then you can pick it up on eBay for anywhere up to £80 or so for a reasonably decent boxed version of the 1991 release.

Alternatively you can spend around the same and have a rare edition of the classic game as iam8bit is taking pre-orders for a special legacy edition of Battletoads.

What Comes With The Battletoads Legacy Release?

The special edition is limited to 2000 copies only and comes packed with either a more common translucent Translucent Zitz Green or if you’re quick the ultra limited Pimple brown cartridge.

On top of that, it has a full colour manual with restored artwork, a fold out box and a few other treats that will be included although they don’t say exactly what they are.

How Much Is it?

Battletoads is on pre-order right now for $99 which sounds steep but then again buying the original release in reasonable condition is about that much on auction sites anyway.

It’s limited edition allure will no doubt be what die hard fans are looking for and should make for some awesome bragging rights if you are lucky enough to get a copy and you won’t have to wait too long either as Battletoads is expected to ship out sometime during the autumn of 2020.

What are your memories of Battletoads? Did you ever complete it? What other classics games would you love to see re-released? Let us know in the comments below.