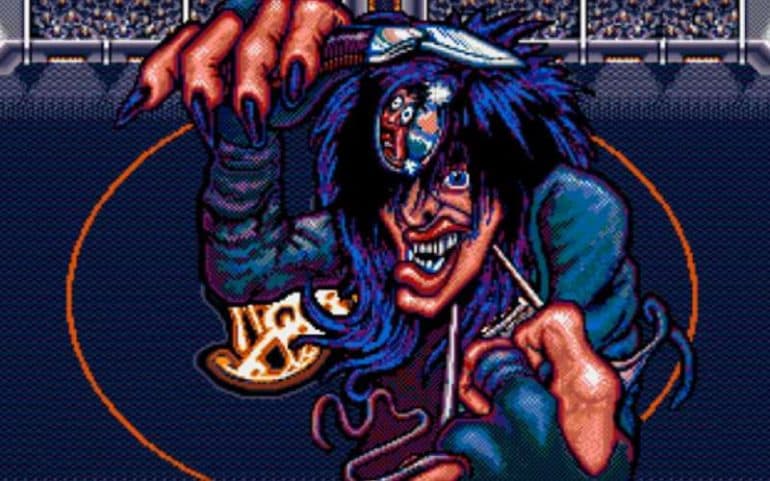 Progression is upwards as you aim to reach the top and defeat the boss which range from what looks like an angry parent or record company exec to a nicely animated spider all the way through to a mutated head that takes half the screen.

It’s good fun and has a rock and roll theme throughout and has a nice pong style bonus level to play where you slam your pinball against skeletons.

Super Pinball: Behind The Mask – SNES

Super Pinball came out in the US and Japan on the SNES/Super Famicom in 1994 so unless you got it on import back in the day you may not have heard of this let alone played it.

The Game is a simulator with a more natural tilted view that you would have in the arcades and even has the little screen with the bonuses and score pop up when you score big or unlock a feature on the tables.

We quite like the digitised look of the game too but the game screen was a bit small and the three tables were a bit basic so it might be one for die hard fans or collectors.

Full Tilt Pinball came out on the PC back in 1995 and was from Sim City makers Maxis.

It came with three tables and each one was pre-rendered giving it a realistic look and had the score board on a side bar which was actually quite handy as it didn’t interfere with the game.

One of the levels, 3D Space Cadet also came built in to Windows 95 through to Windows XP so if the I.T department hadn’t taken it off alongside Solitaire and Minesweeper you could sneak a play when the boss wasn’t looking. Nice!

This 1992 sequel to Pinball Dreams took the already stellar game play and added more tables and made them far bigger than the first game.

Everything in Pinball Fantasies is polished and looks stunning and again just feels right on the Amiga with the keyboard controls being the same as before.

If you’re hankering the for the definitive retro pinball video game then this is a great place to start. It’s so good!

Pinball Fantasies also came out on the Amiga CD32 and Atari Jaguar as well versions for the Gameboy and later on the PSP.

Which Pinball Video Games did you love to play back in the 90s? Let everyone know in the comments below.