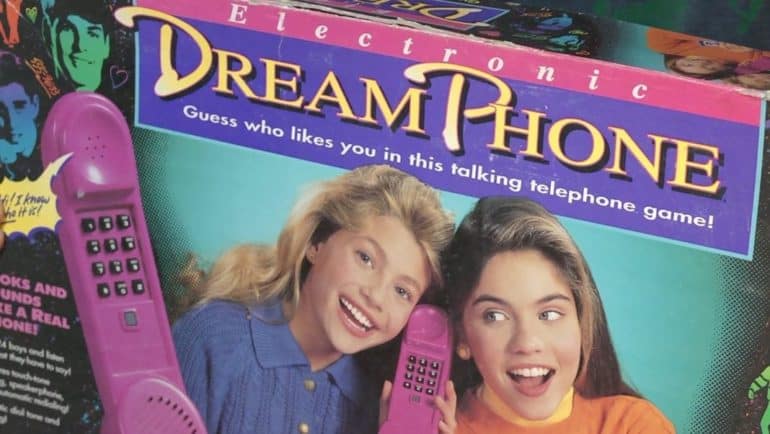 Dreamphone: A 90’s Girls Sleepover Classic – Here’s Why You Should Revisit it!

If you were born in the mid-80s and started your early or late teens in the 90s,

I can guarantee you either played this game or better still had the pleasure of owning it!

Dreamphone which first came out in 1991 was the first ever electronic dating game.

With its iconic bright pink cordless phone, it gave a chance for a girl to find out if SHE was the one who had a “hot” secret admirer.

Dreamphone came with 24 possible admirers who could be the one who chooses you.

When you start the game each player receives a playing sheet which has all 24 possible admirer’s names on, along with places they hang out, sports they might play, favorite food and clothes they could be wearing.

Each clue has a box you can tick to eliminate them.  Four cards are handed out to each player to start playing Dream phone; each card will have a different boy with their phone number on the bottom of the card.

Typical to real life boys in the 90s (and probably still the same now) they never just come straight out and tell you that they think you are cute, they tell all of their buddies instead.

You then have to ask them questions to find out who this guy could be!

I remember being the one to make the first call; it was a guy called Mike. Mike wore a stripy mustard and dark green polo neck jumper and sported a creepy smile, I remember just thinking one day when people play this their chosen admirer is going to be him!

Every time a new game started a new admirer would be picked at random, so each game was always a guessing game.

I dialed the number, anxious to receive my first clue only to be wounded with this response “, I know who he is but I am not telling HA HA ” (can you guess, I never did like Mike).

Other well-known responses would be “he’s not wearing a hat” “he’s not at the beach” it really was nail biting stuff and as responses were given you would tick them off on your sheet.

As the responses keep flowing and the phone bill on dream phone keeps increasing the chance of truly finding your soul mate draws closer and closer.

However, when my list was decreasing and the names were being ticked off, I remember having Steve and Carlos left as the options.

Steve who hung out at Woodland Park was the winner in probably most of 1990’s girls eyes who played DreamPhone, with his cute juvenile face and those blonde “kiss curls” that every guy fashioned in those days and then Carlos, a dark haired mature guy who hung out at the gym wearing 17 layers of clothing.

I took my chances and took a guess that Steve was the secret admirer, I dialed in his number and his response was as follows “You’re right, I really like you!”

I played the game more times than I can remember, and it really was a huge highlight of my adolescent years.

I later found out that you could also play this game as a solo player; however, it really wasn’t the same without people to celebrate your victory with as this was the game that was brought out on sleepovers.

So why is it a classic game? We’ll for many of us it was a chance to have fun and pretend to have boyfriends even if it was just for the game and whilst it was far removed from real life it made us all giggle and that’s what playing a game is all about, isn’t it? To have fun with your friends  each and every time you played it.

If this brings back happy memories of your younger years, go and take a look in your attics to see if you still have this genius game hidden somewhere, get your old friends together, turn off your smartphones, grab a bottle of wine or two and relive your younger years. You never know…..Steve may like you too!

Did you play Dreamphone? What’s your favorite moment?