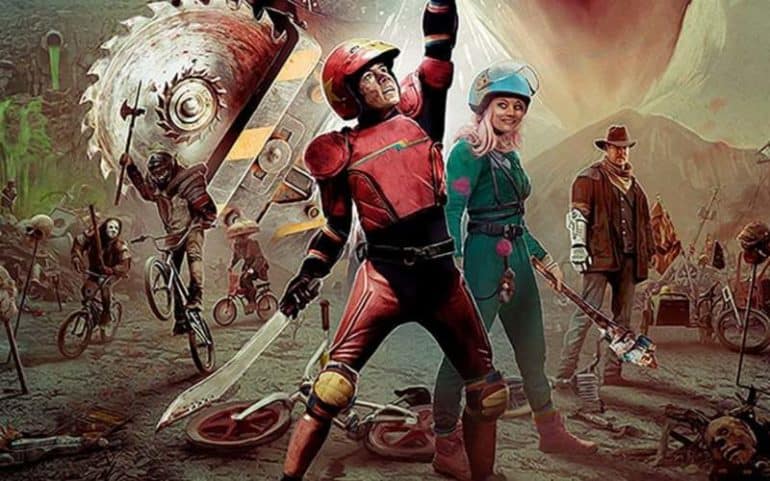 What do you get if you mix BMX’s with ultra comic book violence with an endearing story about friendship in a post apocalyptic retro future based world?

Well, you get Turbo Kid which is an independent Canadian made Sci-Fi action movie from 2015 that is a vertiable smorgasbord of over the top action, comedy and horror and it delivers all of it to a gorgeous Synthwave soundtrack.

Turbo Kid is set in a post apocalyptic wasteland in an retro future based 1997 where androids and their human masters fought a brutal war all that’s left is remnants of a lost world full of pollution, desolation and violence.

The Kid is the main character who has lived alone in a bunker and ventures out to search for items in the Wasteland so he can exchange for water which is a hugely in demand commodity.

He’s a young orphaned teenager who has an obsession with comic books, in particular Turbo Rider as well as collecting other trinkets from a lost world including plenty of 80’s toys and gadgets.

One day whilst reading one of his comics he meets Apple, an infectiously bonkers and friendly girl who latches onto him and together they go out in to the wasteland to find more treasures to exchange and hold onto.

Unfortunately the wasteland is ruled with an iron fist by Zeus (played by Michael Ironside) who controls the water and is only interested in gathering more power to hold over the inhabitants of the wasteland.

The Kid meets Apple and they soon get on the wrong side of Zeus and his sadistic horde of Mad Max looking minions.

Luckily, The Kid comes across an abandoned and buried aircraft whilst scavenging where he finds the uniform and weapons that his hero Turbo Man used in the comics he reads and so he becomes Turbo Kid

It all culminates in a brutally entertaining showdown that is a riotous feast for the eyes and hilarious in its execution yet staying true to its indy film roots.

To get a better idea of what the movies about and its post apocalyptic setting check out the original trailer for it.

What Makes Turbo Kid A Must Watch Movie?

If any of the above has peaked your interest then obviously go and watch it, however if you need more convincing then read on.

The film is a love letter to that innocent time of childhood where you rode around on your bike all day, read comics and made friends easily whilst gallivanting about.

This innocence and wonder that inevitably gets lost as we all grow up is front and centre of the whole film and it delivers in a way that compliments the action story rather than just be there for the sake of it.

Special mention has to said for the setting.

It’s set in a barren and scarred industrial landscape with the remnants of the previous world left to rot and anything of value is being stripped and repurposed for this new and brutal world.

And of course, cars don’t work anymore so everyone uses bikes, in particular BMX’s to get around and they feature heavily in the movie which just adds to the nostalgic charm.

Turbo Kid takes all the staples that 80’s kids grew up with and mixes them in to the movie incredibly well.

If you loved watching classics movies like BMX Bandits, Mad Max, The Evil Dead and adored Saturday morning cartoons then you’ll see nods towards them in the movie as well as toys and tech from that era throughout the crescendos of violence.

By no means should you expect these influences to basically be a re-imagining of the films and shows above, it’s more of a homage that blends multiple genres and themes together both subtlety and overt.

Aside from the comic book violence and gore there is an underlying theme of friendship where you’ll watch the blossoming relationship between The Kid and Apple become something more.

It’s a very sweet thing to see the awkwardness that The Kid portrays and child like excitement from Apple and is a counter balance to the action.

There is a real chemistry and kindness between them and you’ll feel for them throughout and its testament to the great acting that both Munro Chambers (The Kid) and Laurence Lebouf (Apple) bring the characters to life.

Michael Ironside does a stellar job of balancing the charm and brutality of the wasteland dictator and whilst his right hand man doesn’t speak at all, the menace from the masked disc saw armed psychopath is palpable and his comeuppance will be on your mind as you watch the movie.

The rest of his minions looks like something from Mad Max with body armour and post apocalyptic punk-esque hairstyles and their dimwitted approach to taking on Turbo Kid, Apple and their hard punching Indiana Jones lookalike ally Frederic who adds an extra level of coolness to the movie.

The soundtrack also compliments the action and bonding scenes brilliantly. If you’re a fan of Synthwave then you’ll love this movie.

The music ranges from upbeat tracks for the action and then features haunting and sinister synth lines that fit in perfectly with the scenes and settings as well as the innocent and slightly melancholy music when The Kid and Apple are with each other.

Why You Should Watch Turbo Kid

Overall if you love over the top action, a smattering of gore, music that compliments every scene perfectly and heroes you feel for and want to win then Turbo Kid is a must watch.

It may be a low budget production but don’t let that put you off as you’ll be missing out on one of the sweetest action movies that has come out in years.

Turbo Kid is pure escapism that will leave you wanting more as the 95 minute length of the movie will fly by.

It’s full of twists, action and adventure and imagination that is frankly missing from much larger productions.

Where To Watch Watch Turbo Kid?

Watching it might be hard to do unless you have a subscription to Shudder as its not on Netflix or Amazon at present.

So, it’s either Shudder or stumping up for the DVD or Blu-Ray version for now but its worth it as its infectious charm and in your face action will make you watch it over and over again.

What Do You Think Of Turbo Kid?

Have you seen Turbo Kid? What do you think of it and what’s your favourite moment from this cult classic Sci-Fi action movie?

Let us know in the comments below.