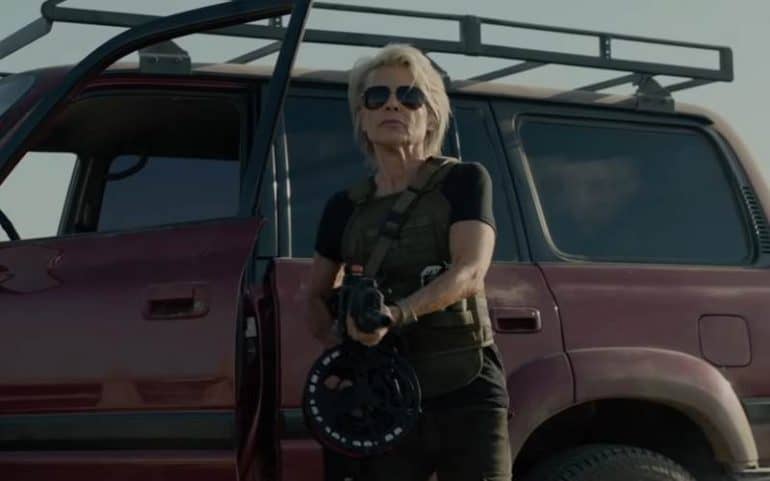 After what seems an eternity for Terminator fans the trailer for the upcoming James Cameron produced movie Terminator Dark Fate has just landed.

Normally trailers give away too much but for once we only get a glimpse of what’s to come.

Check it out for yourself if you haven’t seen it yet.

What we know so far about Terminator Dark Fate

Terminator Dark Fate is set after the first two movies so basically every other movie you’ve seen since won’t be cannon and it looks like Judgement Day has been delayed once again but has obviously happened as Skynet is sending back Terminators.

It’s great to see Linda Hamilton back in her role as Sarah Connor where she seems to be a Terminator Hunter.

The person they now seem to be protecting is a Mexican woman so it looks like the timelines may have shifted.

As there seems to be no sign of John Connor in the trailer it may mean one of two things.

He’s dead or his role is no longer important but that could all change in the main movie release.

We all knew Arnold Schwarzenegger would be back in the movie and the only glimpse we get is of him answering the door to Sarah Connor at what looks like a remote cabin somewhere.

What his role will be is uncertain as it looks like Mckenzie Davis (Halt and Catch Fire, Bladerunner 2049) is the main protector in the movie and she seems to be a new human/Terminator hybrid, a bit like Sam Worthington’s character Marcus Wright in Terminator Salvation.

Naturally there seems to be lots of action throughout the trailer for Terminator Dark Fate including the usual Terminator staples such as car chases and one on one fights between the Terminators themselves.

Fingers crossed we also get glimpses of the Future War post Judgement Day as they are always awesome to see and have always played a role in all the movies, except Salvation of course as that was the Future War itself!

What has transpired since the teasers trailers release is that die hard fans are not happy with it at the moment with at best mixed reaction on Reddit and Youtube about the franchise but the important thing is if you like it that’s all that matters.

When is Terminator Dark Fate Out?

Terminator Dark Fate is out in UK cinemas on Friday 25th October 2019 and its likely that many of your questions will be answered leading up to it with additional trailers and when the hype machine for the movie kicks into overdrive.

Overall, we’re pleased a new Terminator movie is coming and that James Cameron is involved once more and if its more of the same then it will be fun to watch but deep down I’m hoping that it will be something more than this all we can do for now is reserve Judgement until it’s released.

Are you excited for the new Terminator Dark Fate Movie? Let us know your thoughts on the trailer and your hopes for the movie in the comments below.