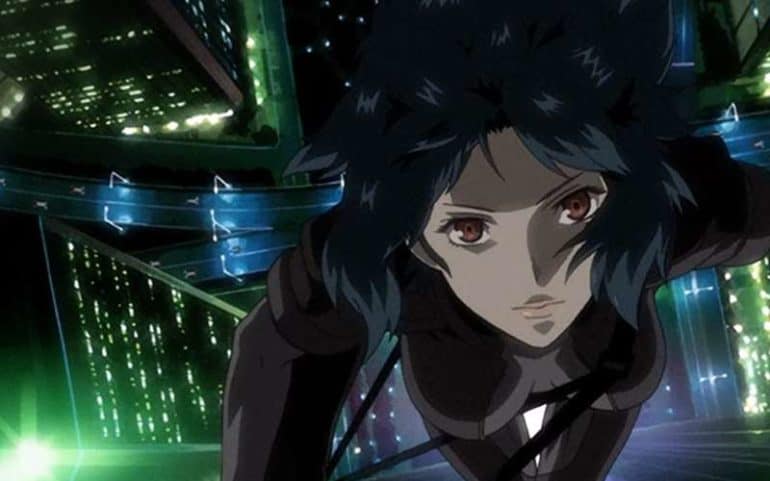 The Cutting Edge Legacy Of Ghost In The Shell

Let’s hark back to 1995, when Jungle ruled the UK dancefloors and anime was starting to make some waves.

Occasionally being shown on Channel 4 with classics such as Hokuto no Ken, 3×3 Eyes, and Oedo 808 when Ghost In The Shell arrived in all its Sci-Fi awesomeness.

What’s Ghost In The Shell About?

Ghost In The Shell is nominally a Sci-Fi political espionage thriller about the actions of a secretive intelligence service unit but covers so much more than that.

Starting off with their intervention to stop a trade deal going wrong, with a blaze of gunfire and technological prowess, the movie ebbs and flows with action set pieces, intriguing and entertaining dialogue, and a fittingly haunting soundtrack.

Ghost in the Shell is one of those movies that grabs you from the first frame with an iconic dive from a tower block by the main character, Major.

The animation itself stands up well today with subtle CGI fitting well in to the detailed hand drawn backdrops.

So without further ado let’s get right into the cybernetically augmented neurons of this sprawling cyber brain.

To kick things off this is very much a tale of an information war using cyber warfare to achieve political ends.

Ghost In the Shell predated the arrival of weaponized computer viruses by quite a margin and this is used to lethal effect by some characters to achieve their own personal goals.

The Depiction Of AI

At this point AI was very much in its infancy and although you could buy basic robots in the nineties to carry out household tasks they were nowhere near the intelligence of today’s automatic vacuum cleaners.

By contrast the philosophical questions posed by the characters Kusanagi and The Puppet Master get right to the heart of what sentience is whether it be human or machine.

The scene where the Major emerges from the depths of the sea and talks to Batou about why she still seeks solitude is a truly spine tingling moment.

Needless to say, the script of this section either in the dub or original language will stay with you long after the end of the film.

Everyone Loves A Montage

Many other animes use montage to some extent or another whether for dramatic or comic effect.

Here the visual narrative draws the viewers gaze over the city as Kusanagi sees it.

This drawing together of all the themes of the film without words and it’s melancholic music echoes is something that very few other anime films have matched or even attempted up to the present day.

The Internet of Things

At the time of its release, the internet was still running on pretty basic machines and most websites were quite sparing when it came to graphics.

Pages would take an absolute age to load, even if it had one picture, and you had to hope the dial-up connection wouldn’t drop halfway through otherwise you’d have to start again.

In Ghost in the Shell, Section 9 move seamlessly through public sector utility networks via graphical user interfaces access directly from their brains.

This was something else entirely and only smart motorways today scratch the surface of what is depicted here.

Automation from clerical robots and vehicles is right at the heart of the story at every turn.

Contrasts Between The Manga And The Movie

This is an interesting one as nearly all manga adaptations have a pretty solid basis in their original format and barely deviate from the source material.

Ghost in the Shell only touches on a small part of the book and instead charts itself a path into innovative waters.

For some weird reason a Ghost in the Shell 2.0 was later commissioned which adds extra CGI to some scenes, it’s worth a watch but everything looks slightly out of place.

The manga really is more like the jokey style of Dominion Tank Police whereas the movie has a deadly serious tone.

The main similarities arrived with the sequels which in the case of both formats went totally off in to the wilderness of densely packed ideas.

‘Innocence’ definitely deserve it’s own article but in short requires many many viewings to fully appreciate.

Similarly with the Man Machine Interface manga the setting and pace of the story is both fast and full of intricate plotting.

If someone had the audacity to adapt Man Machine Interface faithfully it would still be just as futuristic and forward-thinking if released today and it would certainly be above the level of the live action version by some margin.

What do you think of Ghost in the Shell?

Is there are a more forward thinking series around today that is signposting the next generation of technological advancements?

Let us know your thoughts and insights in the comments below.