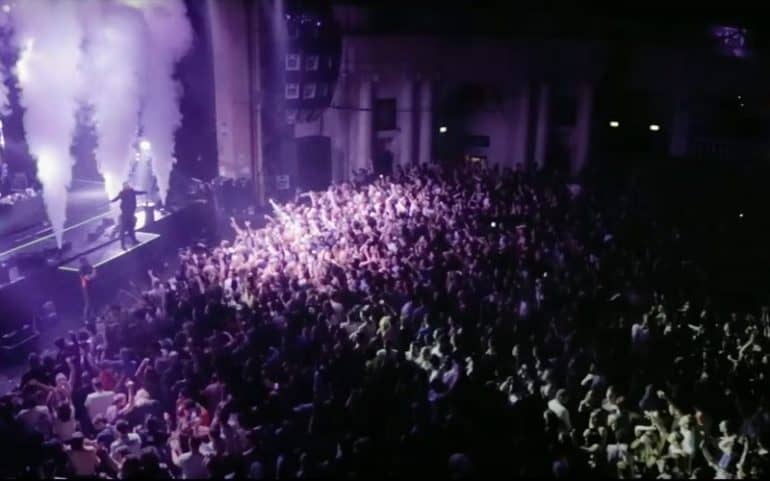 Drum & Bass has a rich and incredibly complex history so anyone trying to document that history really needs to know their stuff.

Drum & Bass: The Movement is made by scene legends Drum & Bass Arena and features interviews and clips from some of the biggest names of the scene.

We recently reviewed the One Nation documentary which focused solely on their brand but this one aims to go much deeper.

The problem is that Drum & Bass is a massive genre with so many factors that make it what it is and that makes it impossible to document everything.

The Movement is presented in a logical order and charts the big events and tunes in chronological order.

This works really well and means that it doesn’t meander too much or obsess over any one moment.

One thing we felt was overlooked from the beginnings is its origins.

It is briefly mentioned that it’s influenced by Hip-Hop, Reggae and Dub but there’s only one mention of the Hardcore and Jungle scene that it truly spawned from.

It would have been nice to at least spend a couple of minutes on the change in sound from Jungle to D&B.

Of course, those of us who’ve loved it for years already know but it’s an important part of the story.

Rise Of The Beast

The story of how the music went from the dark and brooding cousin of rave to the global phenomenon it is now is genuinely fascinating.

The interviews are what really makes this documentary and hearing legends of the scene like Goldie, Andy C, Roni Size, Ed Rush & Optical, John B, Digital, and Spirit (R.I.P) talk about what made each year unique is great.

Something that sets this apart from other documentaries is that the DJs and MCs interviewed don’t pull any punches when it comes to sharing their views on the scenes progression.

They certainly don’t hold back on subjects like Vinyl vs Digital mixing and making tunes specifically with the charts in mind.

The production of the documentary is first class and a massive step up from previous attempts.

Slick animations segway the years and the music is much louder than the interviews which gives it a real impact.

Some of the sound quality on the interviews is a bit off in places but it’s easily overlooked as the content is sound.

It’s also great to see some of the rare footage from classic raves and even some footage of Roni Size at Glastonbury.

Each segment really gives you a feel for the scene at the time and the 98-03 period sends shivers up your spine.

Those of us that lived it will be transported back instantly.

Of course, this isn’t perfect by any means.

We’ve already mentioned one or two minor points but there are some other issues, although most are nitpicking.

Some of the years are really skipped and a lot of the sub-genres are ignored entirely.

Obviously they’ve taken the decision to focus on the biggest tunes and styles of the day but there’s some glaring ommisions.

Whilst they obviously couldn’t mention every label there is one glaring omission, V Recordings.

Quite how you can leave out what is argueably one of the top 5 labels of all time and its huge roster of DJs and Producers is baffling.

Jump Up only gets a brief mention when it was one of the biggest styles in the late ’90s and is still going strong.

Neuro isn’t mentioned at all and neither is it’s inspiration Tech Step, that said most of the tunes they’ve chosen from the late ’90s are Tech Step so maybe it didn’t need to be mentioned.

Pretty much everything from 2010 onwards is Liquid or the commercial chart sounds which makes sense but certainly doesn’t tell the whole story.

All in all I would say that this is a must watch documentary if you love Drum & Bass.

I’ve been into the scene since the late ’90s and there was still stuff in there I didn’t know about.

It does a really good job of showing why Drum & Bass is the powerhouse genre that it is and gives a good overview of the history without getting too in depth.

That makes it an easy watch.

It isn’t perfect but it’s good and well worth your time.

You should definitely check it out and even better Drum & Bass Arena have released it for free on YouTube so you’ve got no excuses.

Also as a side note, there’s a quote at the start which we can’t let go.

I’m not sure who says it as it’s a voiceover at the beginning but the quote is “Drum & Bass is so much faster than any other dance music”.

Um, really? Have they not heard of Hardcore, Breakcore, Gabber, Speedcore, or anything else?

Drum & Bass: The Movement is available for free now on YouTube.

Drum & Bass: The Movement Documentary Review
Is it worth watching?
This is best realised documentary about Drum& Bass yet and whilst it does have some issues it should be on everyone's watchlist.
Good Bits
Awesome soundtrack
Fantastic interviews
Bad Bits
Missing some big parts
Focuses too much on the commercial side
85
Retroheadz Score

The Ultimate Rave, Techno and Hardcore Bangers From 1991