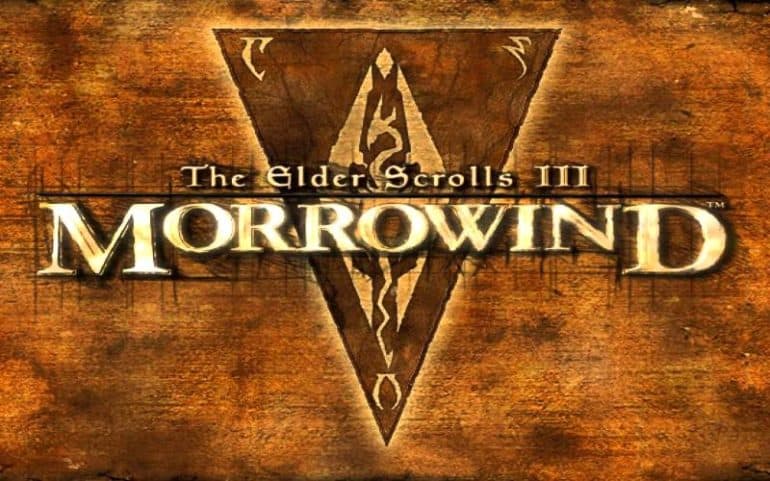 Morrowind is an expansive open world RPG, published in 2002 on Windows PC’s and Xbox, by Bethesda Games Studios.

Both the development team and game are renowned for both heavily influencing and popularizing the open world genre and bringing the experiences of tabletop role-playing games to life through video gaming.

Influenced heavily by Dungeons and Dragons, Morrowind established its own identity as a link between modern western RPG’s and the previous table-top board games from the past, becoming one of the most iconic open world RPG games in modern history. It is the predecessor to it’s critically acclaimed sequels, Oblivion and Skyrim.

The World of Vvardenfell.

As a prisoner, with no identity, an unknown past, and an uncertain fate, the all too known starting point for an elder scrolls experience, as soon as you leave the character creation screen, you are abruptly escorted to the docks of the Seyda Neen, a glum, swampy settlement  this is where you begin your unique adventure into the world of Vvardenfell.

After brief exploration and a few conversations with some of the characters, the main quest will take you along winding roads through rough and gloomy landscapes where giant mushrooms tower over you as you bump into strange alien-like creatures along the journey. Balmora, a larger settlement of a city-like nature, built along a river channel and characterized by its strikingly peculiar architecture, is the next destination. The change in scenery here is pleasant, and homely, and the city feels lively, with different districts.

The pleasant scenery is however, a mere distraction, as Morrowind is very much influenced by it’s dungeon crawler style predecessors, so there are many dungeons to traverse, and many places filled with inevitable danger.

There are many creatures that exist in the world of morrowind, from Sleepers, odd lovecraftian-like beings who have transcended humanity and become magical entities, Kwama, which are alien-like insectoids and Netch, floating squid-jellyfish hybrid creatures I struggle to describe, to steampunk brass constructs and mosquito-like dog rats called Nix-Hound, alongside the usual zombies, skeletons, trolls, ghosts and all of the other demonic creatures you would expect from an elder scrolls adventure.

Creativity is abundant in Morrowind from the world design and the creatures to the characters and their storylines, it rarely to never feels neglected.

Morrowind is set in Vvardenfell, the largest of its islands, although Morrowind itself is actually a large province with a much larger mainland. Vvardenfell is 16 square miles of open world, and it’s filled with adventure and livelihood, there are many places to visit, rich with quests, secrets and characters with their own storylines.

In the southernmost region lies Vivec city, a magnificent temple city, with grand pyramid style architecture, and Ebonheart a more familiar, medieval city with its own castle and an elven twist. To the east is Sadrith Mora, a hobbit-like town where people live inside giant mushrooms and the monolithic Red Mountain towers over the horizon, from the heart of the island, reminding you of the disparity and impending sense of doom throughout your seemingly peaceful journey as you traverse the rest of the world and discover the rich variety of locations. Morrowind is without saying, a unique place; unique being a rather disingenuous understatement, the world is literally raw material from the very fabric of one’s imagination, filled with the inconsistencies and abrupt changes in design, yet remaining extravagant, bizarre and outright creative.

Understanding the Lore of Morrowind…

Morrowind is home to the Dunmer, a race of Dark Elves, who were once a great race of Elves known as the Chimer. Chimer did not worship gods, but instead were staunch worshippers of Daedra (ancestor spirits that did not chose to help create the mortal world) which lead to conflicts in their original homeland, which they eventually left.

Upon finding Resdayn, which is now known as Morrowind, the Chimer discovered a race of elves that were significantly more technologically advanced, known as the Dwemer. The Dwemer worshipped no gods and no demons, only their persistence for curiosity and technology believing the gods to be nothing more than powerful spirits. The Chimer continued to worship their Daedric overlords which lead them to be favoured by the Daedric Prince Azura, a powerful ancestor spirit. Tension increased between the Chimer and Dwemer as both vied for power and control over Resdayn, and had different visions and negative relationship escalated, until the Dwemer discovered a powerful artifact called the Heart of Lorkhan.

Lorkhan was a powerful ancestor spirit that is believed to have tricked the other ancestor spirits known as Aedra into sacrificing themselves to create the mortal world, Lorkhan’s heart was ripped out of his body as punishment and thrown into the sea, which eventually spawned the Red Mountain. The Heart of Lorkhan was a tremendously powerful artifact that could transcend mortals to godhood, through a process called the Psijic Endeavor.

Upon discovering the Psijic Endeavor and extracting its power to create a powerful golem, the Dwemer sparked war with the Chimer, which lead to the battle of Red Mountain. Lord Indoril Nerevar, King of Resdayn, and his companions, Voryn Dagoth, Almalexia, Sotha Sil and Vivec, lead the Chimer to war against the Dwemer.

However, in this conflict, the Dwemer abruptly vanished from existence under mysterious circumstances, leaving behind no traces, other than the remains of their technology and leaving behind the Heart of Lorkhan and the Dwemer tools required to extract its power. This lead to a victory for the Chimer alongside acquisition of the Dwemer technology.

The Heart safely remained in Red Mountain and Voryn had taken the tools into his possession,  uncertain of what to do with the tools however,  Voryn Dagoth insisted that the tools should be destroyed.

Nerevar eventually died, unclear whether he passed away to his wounds or whether the tribunal themselves had killed him, it was certain that the Tribunal were the only means of looking after the tools and the heart.

Sotha Sil later discovered the means of using the Heart of Lorkhan to achieve the Psijic Endeavor using the tools, and transformed from mortality to godhood, convincing his former companions Almalexia and Vivec, to undergo the same transformation, the Heart of Lorkhan successfully lent them power so long as it remained intact and was visited in Red Mountain frequently to replenish that power. Azura, was outraged by this decision and cursed the Chimer, turning them into Dark Elves, the last remaining Chimer were the Sotha Sil, Almalexia and Vivec.