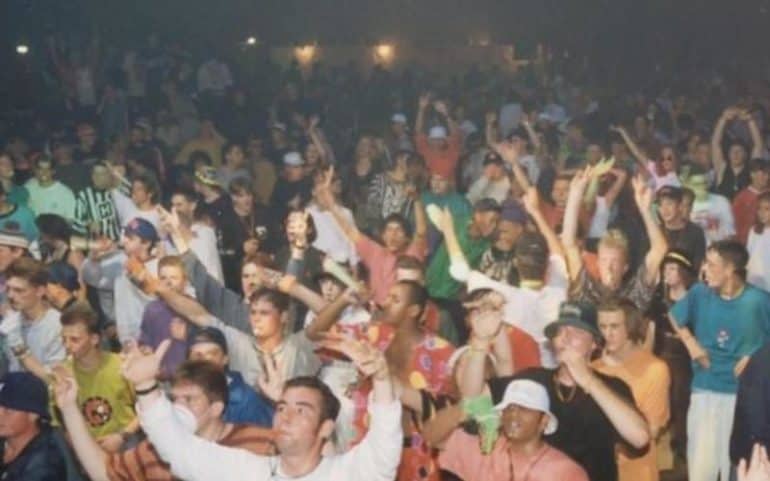 Best Time’s of The 90’s: The Happy Hardcore Years

Happy Hardcore is without doubt one of the best music genres around, a bold statement I’m sure you’ll say but for those born in the late 70’s and early 80’s it came to prominence slap bang in the middle of our teenage years and with it a culture and legacy that in reality hasn’t been seen since.

For many of us we’ll never let go of those epic years of bomber jackets, raves, tape packs, vinyl and awesome all-nighters and the memories with your mates that get triggered from time to time to remind us how lucky we were to have been alive at the right age and the right time!

Happy Hardcore: The Music of Our Past, Present and Future

Let’s start with the music itself, Happy Hardcore is fast, frantic, euphoric and futuristic.

It was hugely melodic and original and at the same time took the music our parents listened to and gave them a new lease of life.

With remixes of 70’s and 80’s classics that now you could not only sing to but stomp to as well, or a cheeky rip of the latest 90’s dance track that you could dance to at 180 bpm!

All Hail The Kick Drum

It threw in ear-splitting kick drums and techno stabs with earthquake inducing bass and challenged you to last the night.

We stomped away without a care in the world all to the sweet vocals, piano breakdowns and euphoric melodies that got stuck on a loop in your head for years to come.

These tracks made us who we are today!

Happy Hardcore is the epitome of youthful exuberance and positive vibes.

It took you away from your mundane and humdrum existence and amplified who you could become and when the music was playing you didn’t have to wait.

The future was here, our future, not anyone else’s version that was being forced upon us to accept and with that anything was possible.

With Happy Hardcore you could literally be whoever you wanted to be.

There was no pretentiousness, there couldn’t be as everyone else who didn’t get it was ridiculing us ravers..

We were called Cheesy Quavers or the music itself was called Nappy Hardcore and whilst Drum & Bass went on to have mainstream acceptance we were left to simmer in suburbs up and down the land.

Did we care? Hmm, maybe a little but did it stop us in any way, hell no!

This ridiculing only pushed us harder into the music’s embrace and because it was underground and not accepted by the masses,.

Happy Ravers didn’t get as much trouble or fights as other genres attracted at the raves because everyone was here for the music.

It wasn’t to say that it wasn’t there but generally the worst thing that could happen to you if you accidentally bumped into someone at a rave was a handshake and a smile, an apology back or most likely a big old pilled-up hug!

The speed of the music and the often cartoon and fairground-esque melodies were the main barrier to entry for many and thankfully, mainstream acceptance.

Whilst many teenagers were racing ahead to be grown-ups, we weren’t so much, and we embraced our youth, because after all, you’re only young once.

With Happy Hardcore, you could either handle it or you couldn’t and its thanks to this tempo barrier being in effect that made it a pretentiousness free environment. It wasn’t about looking good, it was about feeling good inside.

Evil looks and ‘OMG what is that person wearing’ never came to the fore because we were too busy dancing and having a collective good time and pulling a moody pout whilst Toytown is blasting away would be met with mirth as someone having a weird gurning moment.

Looking back at when it came to prominence, the mid to late 90’s was a time when if you went out on Saturday night in town you couldn’t get in anywhere if you weren’t wearing shoes, trousers or a shirt, stuff that! Who wants to dance in shoes!

Going for a night out shouldn’t be like going to wedding!

Thankfully, going to a rave meant comfy trainers, jeans or tracksuit bottoms and of course the coveted bomber jacket with its multiple (and very , ahem,…handy) stash pockets emblazoned with your favourite rave organization or record label boldly on display.

Hardcore and proud of it!

No one cared what you wore, no one cared how you danced either! Dress for comfort and dance for your life! Refreshing was an understatement and whilst the rave generation before us did this, we carried it on, just harder and faster!

Going to a rave wasn’t about going on the pull, getting bladdered on lager and sauntering home at 2am with a greasy kebab in hand to mitigate the painfully inevitable bleary-eyed hangover the next day.

Sure, we all did that from time to time with our non-raver mates and it was fun and part of growing up but the excitement of our first big moments of freedom and being allowed out to whenever o’clock was and only could be taken to the highest level by travelling far and wide to the raves of the day.