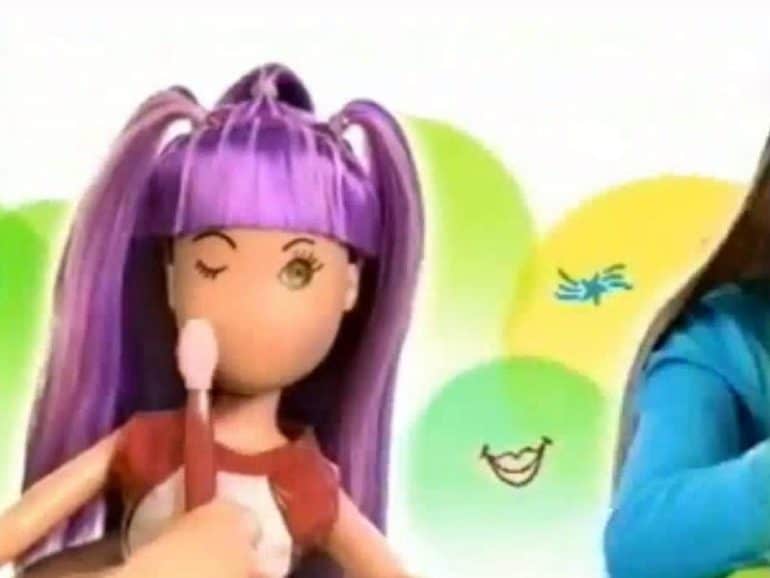 Looking back at What’s Her Face Dolls

What’s Her Face Dolls were a line of customizable dolls, somewhere in between tradition fashion dolls and creative activity dolls. A few fashion, wig, and other activity packs were also sold.

They were made by Mattel and were available from 2001-2003. After the dolls were discontinued the body moulds were used for the Wee 3 Friends line of Barbie-related dolls.

The standard doll was 9.5” tall, their most noticeable feature was a large round head with no facial features and interchangeable hair.

The dolls face is completely blank with the purpose that the face can be drawn on, with any design the owner wants.

On buying the doll it came with washable colours markers and special stampers for the eyes and mouth. A flower like a mask was also included in corresponding with the stamps, meaning you could align them on the dolls face.

The dolls head lacked rooted hair and instead had Velcro, meaning you were able to change her style with brightly coloured wigs. The dolls figure is very tween-ish with large flat feet, which means the doll can stand alone.

The dolls also came without names but descriptions instead. Glam, was the fashion girl of the group and the palest. Sweet, was artistic and usually wore pink. Hip, the music fan with a medium complexion and Cool, the sporty girl with the darkest sin.

There were four waves of the What’s her face Dolls over the years. Meaning new designs, colours and clothing. As the line was meant to help children be creative most of the clothes were customizable.

The First Edition 2001 What’s Her Face Dolls clothing was reversible, or changeable by adding or removing pieces.

The 2002 “Head 2 Toe” dolls were even more crafty. The clothing could be drawn on and decorated, like the dolls themselves.

A line of Four Extra Outfits also became available (including pyjamas, a raincoat, boots, a swimsuit and a silver party dress) which could all be drawn on to then be cleaned over and over again.

Then in 2003 “What’s her Look” dolls (which also had painted on bikinis) went one step further. In addition to one outfit they came with a long, patterned tube of fabric and scissors. This fabric was meant to be cut into tank tops, dresses, and skirts for the dolls

The doll was without facial features until you drew them on, an imaginative idea or a freaky one? I’m still undecided. What do you think?