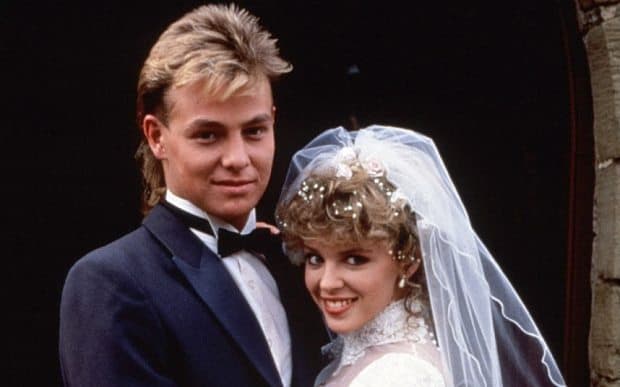 Especially For You – The Scott And Charlene Love Story

By Stacey Lydon-James
In Television
on September 14, 20164 min read

Whether you are a fan or not, everyone has watched, heard of or know’s the theme tune to the Australian soap Neighbours.

Throughout the years there have been some much loved characters and story lines.  The soap is still going strong in its 31st year currently showing on channel 5 after moving from BBC 1 where it originally started off in the UK in 1986.

Growing up in the 80’s and being a fan of the soap there was one couple that everybody fell in love with and just wanted a happy ending for.

Scott Robinson and Charlene Ramsay aka Jason Donovan and Kylie Minogue, with their many makeups and breakups and drama throughout their time on the soap we take a look back at how it all began and relive some of their most memorable moments, here is our recap on the Scott and Charlene Love Story.

It all started out with Scott being a good neighbour when he spotted what he thought was an intruder breaking into his neighbour Madge Mitchell’s house.  Pulling the ‘intruder’ out of the window he receives a punch in the face whilst Madge run’s round to find out what all the commotion is about.

Cue the removal of her cap and a toss of her permed hair, we meet Charlene who has returned from her father’s to move back in with her mum and this is where the story starts.

During this year the producers of Neighbours concentrated on the pressures of growing up as a teenager with exams, partying, drinking and sex and the story of Scott and Charlene’s relationship was full of these drama’s.  Starting off with Scott putting the pressure on Charlene to sleep with him.

When your older brother is the owner of the local hotel Lassiters it looked like Scott’s luck was in.

checking into one of the rooms for the afternoon he was left gutted when Charlene wanting to be honest with him told him that she had already lost her virginity at the tender of age of 15 to her boyfriend Greg who she thought loved her, this was until she fell pregnant, Greg did a runner and left the young girl to have an abortion, and as most teenage boys do Scott stormed off and left Charlene on her own, where she was found later distraught by Paul Robinson.

After wise words from his brother and thinking about his actions Scott apologises to Charlene not before  receiving another punch in the face after which they kiss and made up.

Of course a soap wouldn’t be a soap if there wasn’t arguments and fall outs on the way and this couple most certainly had a few of them.

When Madge started dating the father of the troubled Warren, Charlene took to drinking and partying with him much to the dislike from a jealous Scott and stirring friends, Scott ended things with Charlene thinking that he couldn’t trust her and again Charlene was left heartbroken… way to go Scott!!