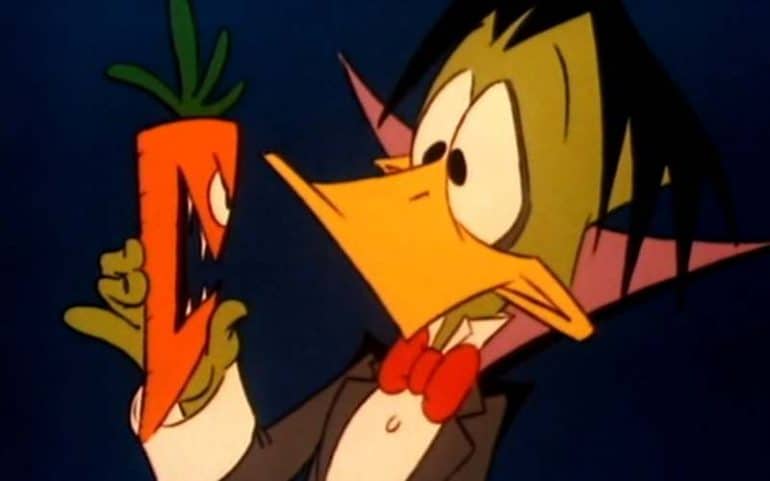 Count Duckula – Looking Back At The Classic Kids TV Show

By Matt Tilke
In Television
on September 2, 20195 min read

Oooooooooo Duckypoos. That’s right it’s time to relive one of the true classics of our childhoods Count Duckula.

Released in 1988 Count Duckula became a must watch after school cartoon series for kids at the time.

Count Duckula was genuinely funny and came from legendary production company Cosgrove Hall, who gave us such classics as Rainbow, SuperTed, Danger Mouse, Jamie and the Magic Torch among many more.

It’s also worth noting that the character was originally seen in the Danger Mouse series as a regularly reoccurring villain.

So Who Was Count Duckula?

Count Duckula is a Vampire who lives in a castle with a host of misfits who are supposed to take care of him.

Whilst his ancestors had all been “resurrected” with no issue, Count Duckula’s own resurrection went wrong when the blood for the ritual was replaced by tomato ketchup.

This caused Duckula to be a Vegetarian, which proves quite tricky as a Vampire. As well as this, there are other aspects of his Vampiric ways that he hates.

He’s always moaning about having to live in a dark castle and had dreams of becoming a Blues singer or another modern profession.

He often tries to help people but thanks to his significant ego usually fail miserably and gets them to hate him.

As with all classic series there were of course a whole host of supporting characters with their own quirks that made it a classic.

Igor is Duckula’s servant and is a traditional horror movie butler who is also a Vulture.

The Butler is constantly disappointed in the Count and is always trying to get him to be more evil by encouraging him to bite his guests or torture people. His character is always looking back to the “good old days” when his former master would bring home victims and they would go on rampages.

Nanny is the housekeeper who raised Duckula. It was Nanny that accidentally put Ketchup in the Resurrection spell and she is incredibly clumsy.

She is a seven foot tall Hen with one wing always in a sling, presumably due to her constant clumsiness.

Nanny had a strong Westcountry accent and would always excuse Duckula’s mistakes like a loving mother would.

Another constant source of comedy was her inability to find a door, usually just walking straight through the wall instead, much to the annoyance of Duckula and Igor.

Dr Von Goosewing was Duckula’s arch nemesis and was based on the Van Helsing character from Dracula.

The Van Helsing-esque character is a Goose with a German accent who hunted Vampires as well as being a mad scientist Von Goosewing was absolutely insane and completely useless as a detective or a scientist.

Von Goosewing would always have long conversations with Duckula before he realised who he was and was often injured by his own inventions.

Dr Von Goosewing also had an assistant named Heinrich who never appeared in the show, leading many to believe that he was an imaginary friend. Heinrich would always be blamed for Goosewing’s mistakes.

Gaston and Pierre often appeared on the show, they were a tall stork and a short parakeet who were bumbling criminals, often trying to rob the castle. They had over the top French accents and were little more than a comedy duo.

They are very much worth mentioning however as they went on to be adapted into their own series, Victor & Hugo, although they would be changed into humans.

The Crow Brothers were four crows, obviously, who were always trying to climb the castle walls to steal the Count’s treasure. Most of the time they fail to actually get into the castle at all.

In addition to these characters there was a whole host of village peasants and relatives who would drop by the castle or the local Inn when Duckula was just trying to get away from it all.

The Pirate Penguins would sometimes appear and were a bunch of stereotypical Pirates who were annoyed with Duckula for wrecking their ship after hiring them for a mission.

In addition to these characters there was a whole host of village peasants and relatives who would drop by the castle or the local Inn when Duckula was just trying to get away from it all.

As is often the case with 80’s cartoons the voice cast was impressive.

David Jason provided the voice for Count Duckula and a number of other characters as he had on Danger Mouse. Jack May, Brian Trueman, Jimmy Hibbert, Barry Clayton and Ruby Wax provided the other voices.

In addition to the good voice cast it had the classic combination of Mike Harding and Doreen Edwards doing the soundtrack.

Count Duckula originally aired on ITV on the 06th September 1988 and ran until the 16th February 1993 after four seasons. An impressive 65 episodes were produced, all of which were shown for several years to come.

The show received a large number of VHS releases and four seasons have been released on DVD.

In addtion to the series there was also a computer game entitled ‘Count Duckula: No Sax Please, We’re British’ which was released on the ZX Spectrum, Commodore 64 and Amstrad CPC.

Count Duckula deserves its place among the halls of classic kids TV, it has everything that a classic should have. Serious amounts of nostalgia, quirky humour and a darkness that doesn’t talk down to kids.

We absolutely loved Count Duckula, it made us laugh and occasionally just like The Trap Door grossed us out as young kids, which was great.

The Show had characters and phrases you could copy in the playground and ultimately it’s that quality which really sings when it comes to the shows we remember from our childhoods.

If Count Duckula somehow passed you by then catch up fast, you won’t be disappointed.