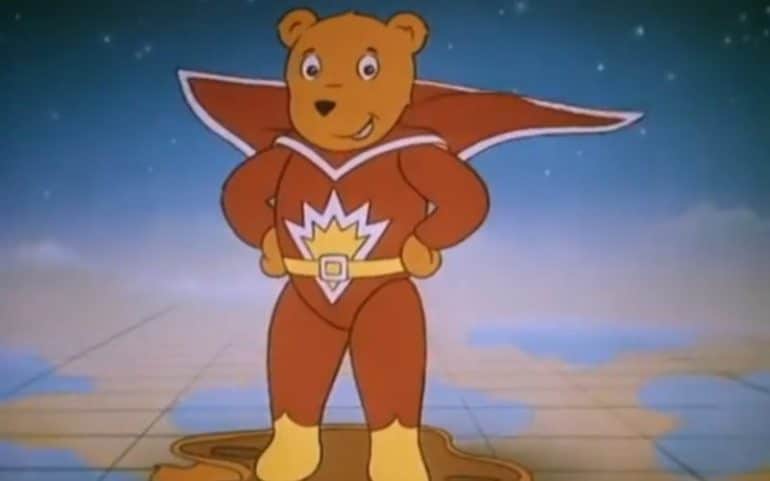 Classic Cartoons You Should Revisit: SuperTed

SuperTed was an iconic cartoon that surely nobody who grew up watching it has forgotten.

It was originally released in 1983 and ran for a total of three series before originally ending in 1986.

The show was written by Mike Young who initially created the character to help his son overcome his fear of the dark.

A Hero For The People

SuperTed was somewhat unique in that Mike Young fought hard to keep the show local to his native Wales.

Despite numerous offers for the show to be made in London he resisted which makes it special.

The accents are one of the many things we hold dear about SuperTed so we are very happy he decided to keep it in house.

What Was SuperTed About?

SuperTed is a normal teddy that was thrown away by the company that made him.

He was discovered by an alien named Spotty who used his cosmic dust to bring SuperTed to life.

After this SuperTed was taken to Mother Nature who gave him special powers, allowing him to transform into a superhero.

SuperTed and Spotty then travel the world helping people in need.

This usually ends up with them having to fight off the evil cowboy Texas Pete and his generally useless goons Bulk and Skeleton.

We’ve already mentioned the backstory of SuperTed himself with his red suit, cape, and rocket boots but he wasn’t the only iconic character in the show.

He was also voiced by Derek Griffiths who would later appear in Coronation Street.

Spotty the alien was yellow with green spots and looked like a robot with a red Mohican.

He came from the planet Spot and was fairly accident-prone.

Spotty was obsessed with SuperTed’s magic powers and was always asking him for the magic words.

Spotty was voiced by the legendary Jon Pertwee of Dr. Who and Wurzel Gummidge fame.

Every hero needs a villain and in SuperTed you had three.

Texas Pete was a cowboy obsessed with money and killing SuperTed.

He constantly comes up with plans to trap SuperTed and learn his magic words although they always fail.

Tex always had an impressive 5 o’clock shadow and used a lasso regularly like a real cowboy.

He was voiced by Victor Spinetti who has also starred in all three Beatles movies, The Return of the Pink Panther and The Krays.

Bulk was one of Texas Pete’s henchmen and was always messing things up due to his lack of intelligence and clumsy size.

His favourite thing to do was eat and he was only really kept around for his impressive strength.

He was the only character in the show to know SuperTed’s magic words, which he used in one episode to become SuperBulk, he forgot them immediately though.

Bulk was best friends with Skeleton and they would often console each other after Texas Pete had told them off.

He was voiced by Roy Kinnear who was best known for his roles in Willy Wonka and the Chocolate Factory, Watership Down and The Three Musketeers.

Finally, there was the imaginatively named Skeleton, who was obviously a Skeleton.

Skeleton was very much a cowardly character that was always worrying and picking holes in Texas Pete’s plans.

He was portrayed as being quite camp and often quite literally fell apart when things got too much.

Skeleton was a surprisingly kind character for an evil henchman and often disagreed with what Texas Pete was doing to SuperTed.

He was voiced by Melvyn Hayes who has starred in It Aint Half Hot Mum, The Curse of Frankenstein and Benidorm.

The Further Adventures of SuperTed

In 1989 the show was sold to Hanna-Barbera who made one new series with a new voice cast.

The only voices they kept were Victor Spinetti as Texas Pete and Melvyn Hayes as Skeleton.

Controversially the BBC and Mike Young decided to redub the series for the UK release bringing back Derek Griffiths as SuperTed and Jon Pertwee as Spotty.

They also decided to split the episodes in half changing the format to twenty-six 10 minute episodes.

Ultimately SuperTed is remembered as a fun and lovable show by those who grew up watching it.

Its British humour and desire not to be just another violent kids show made it special and accessible to everyone.

SuperTed stands out among the pantheon of classic ’80s cartoons with its heartwarming attitude and genuine care.

It is also worth noting that there were over a hundred SuperTed books released which really proves its popularity.

SuperTed really captured the imagination of kids in the ‘80s and we really did love him.

We certainly remember it as one of the best shows from that era and we hope you do too.