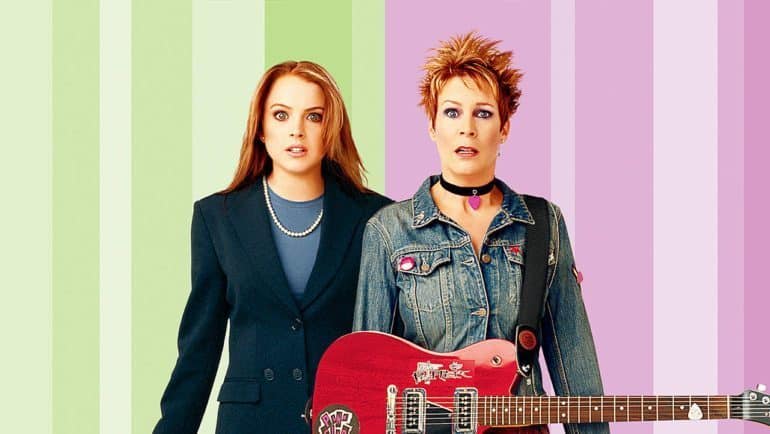 Freaky Friday And Why Everyone Love A Body Switch Movie

Body switch movies are great fun, not only for the actors but us viewers too and Freaky Friday is not a movie to be missed. Jamie Lee Curtis and Lindsay Lohan get to imitate the body language and nature of each other, whilst pointing out the generation gap.

Body switch plots allows adults to act like kids, maybe this doesn’t come as close the amount of crazy fun Tom Hanks has in “Big” but Curtis does come real close.

Curtis plays Tess Coleman, a widowed psychiatrist soon to be remarried. Lohan plays Anna, Curtis’ 15-year-old daughter, a guitarist/vocalist for a garage rock band called Pink Slip. Anna also has a younger brother Harry (Ryan Malgarini), who like every young sibling, things their older sibling is constantly picking on them.

Anna thinks Tess is remarrying too soon, showing what a Disney movie passes as a rebellious phase.

Both mum and daughter go to dinner with future husband, Ryan (Mark Harmon), for dinner in a Chinese restaurant, where they get into a verbal fight. The restaurant family’s grandmother (Lucille Soong) gets them with a fortune cookie curse and the next morning they wake up switched.

Anna looks in the mirror only to see her mother’s body “I look like the crypt keeper!” Tess over sleeps like her daughter usually does. They go through the compulsory horrified disbelief but quickly resume one another lives.

Freaky Friday is directed by Mark S. Waters and written by Heather Hach and Leslie Dixon, it delivers scenes we can anticipate but with way more charm and jest than we predicted.

For example, Anna flirts with a somewhat older guy named Jake (Chad Murray). He rides a motorbike which means Tess automatically dislikes him.

However, now Tess is in Anna’s body acts very bitter towards Jake, whilst Anna who is in Tess’ body is so ecstatic to see him. Before long Anna is riding on the motorbike and Jake tells her how he feels they really understand each other, and that maybe the age gap doesn’t matter.

Freaky Friday comes to a tipping point when a rehearsal dinner and the garage band’s big chance at the House of Blues time slots coincide.

Anna (in Tess’ body) makes a small speech at the dinner where you can hear the daughter’s grudge “It’s great we’re getting married – even though my husband died. How quickly I’ve been able to get over it!” Tess and Anna do care for one another but they are so self-involved that compromise and reason are just out of the question.

It’s easier for Tess to remove Anna’s bedroom door as punishment than to talk to her. It’s easier for Anna to shut out Tess’ fiance then take some time to get to know him.

Lindsay Lohan perfectly reflected the adult like serious and intense focus that was needed to play her mother, and Jamie Lee Curtis has a great sense of playfulness, they’re great for their roles.

We are always strongly aware of who is occupying each body, even if sometimes they seem to forget. It’s all cheesy but it works, maybe there weren’t any major mountainous obstacles we had to overcome but there were some molehills.