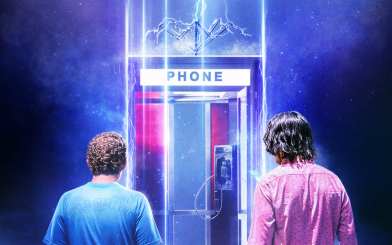 Bill & Ted are returning this summer and it looks like the marketing campaign is beggining.

The movie which is due out on the 21st August 2020 in cinemas in the UK has been tight lipped about the movie so far with no teaser trailers out yet.

However, its just been revealed that a new poster is out and whilst it doesn’t give too much away it’s a sign that things are starting to happen.

Here’s the poster for Bill & Ted Face The Music.

As you can see, not too much is revealed apart from the fact that Bill & Ted are walking towards the phone booth time machine to head back in time to bring harmony back to the universe with their music.

As for the trailer, as soon as its out we’ll report on it but for now you can rest assured that things are starting to happen and August isn’t a long way off so you can officially start getting excited that the film that fans have been asking for is finally coming.

What are you’re hopes for this movie? Will you be heading to the cinema to watch it? Let us know in the comments below.