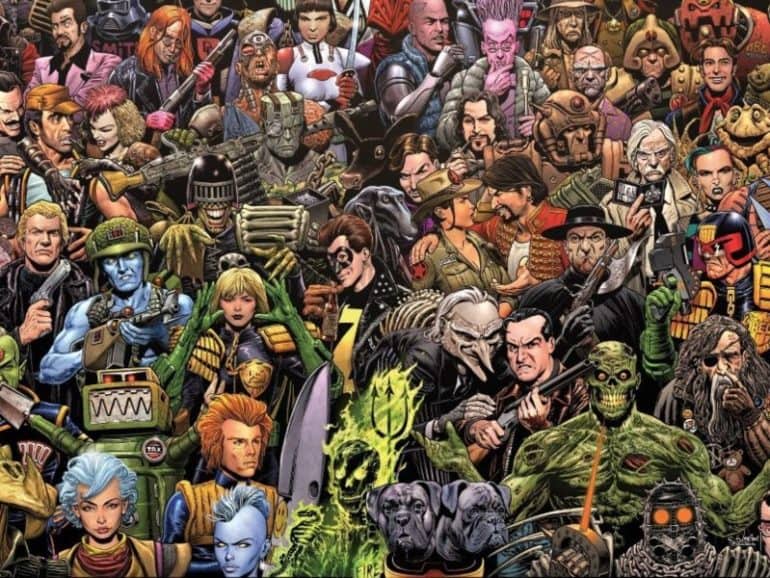 2000AD And Its Continuing Influence on Comic Book Fans

When I was nine years old (in the early ‘80’s) I endured a particularly traumatic dental procedure. Four injections were inserted into my gums, three teeth were pulled and I passed out from the pain. An hour and a half later I staggered out of the clinic pale, covered in my own blood and in a fairly profound state of shock. I looked very much like an extra from The Walking Dead.

As a reward for being ‘good’, my Mum bought me a comic. The Newsagents that I morosely shuffled into had the usual kids fare; The Beano, The Dandy, Whizzer and Chips, all those samey type of strip cartoons, but they also had a choice of three ‘teen’ titles.

There was The Eagle, a comic called Battle, and 2000AD. Now, normally I wouldn’t be allowed a more grown-up comic like these, for fear of warping my impressionable young mind, but on this one occasion I was given a free pass as I’d been ‘in-the-wars’.

So, I mentally tossed a coin and chose 2000AD. I still remember the cover, it was of a character called Sam Slade – Robohunter being attacked by tiny robots: The Teeny Meks. The issue (or ‘prog’ as it was referred to) was number 314 and the cover artist was a guy called Ian Gibson.

I can still remember the little details about this comic thirty-three years later because when I got home and read it, it blew my mind. The beautiful, rugged, gritty artwork of Carlos Ezquerra on the legendary Judge Dredd. The poignant and thought-provoking storyline of Skizz by Alan Moore, and everything in between. It was just exquisite.

There were five chapters of five different stories, each by a different artist and writer, and all wildly divergent from each other. I read it cover to cover and each page seared itself onto my frontal lobes, burning deeply into my brain.

It was nothing short of a paradigm shift in my understanding of what made a story, my world view, my comprehension of everything. Pretty heady stuff for a nine-year-old. Needless to say, I was hooked.

Slavishly devoted in fact. It’s true to say that from that point I never missed an issue for ten years. It was my instant addiction and I spent my pocket money on it every single week without a second thought (all 20p of it) The line-up of artists and writers was consistently top quality, with deliciously satirical humor drawn from the current events of the time. It was so far above anything else on the market that it made them all look like The Beano.

When I started reading 2000AD the comic market in general in England was in decline, but due to the massive levels of thrill-power contained within the Galaxy’s Greatest Comic its popularity proved enduring. This trend did create an odd phenomenon, though.

As the readership of other titles dried up they were ‘absorbed’ by 2000AD, which cherry picked the best stories from them, adding the limping titles’ name to the front cover for a while and then discarding the dried out husk (and name) like a predatory literary parasite.

So for a while there we had 2000AD and Starlord, bringing on board the second greatest comic hero (Dredd being the first, obviously) to grace its pages: Strontium Dog, a mutant bounty hunter with x-ray eyes called Johnny Alpha. A powerful allegory of prejudice and apartheid, it was enormously violent and dirty as hell.

We also gained Ro-Busters, which was like a robotic version of Thunderbirds and was pretty good but spawned the much more insane A.B.C Warriors. and borderline occult series Nemesis the Warlock (Kevin

And, let’s not forget the borderline occult series, Nemesis the Warlock (Kevin O’Neil’s work on this actually makes your eyes water, some of it is downright uncomfortable to look at. It’s absolute genius.)

Then Tornado got the thrill-sucking treatment, stealing Blackhawk; a Nubian galley slave of the Roman era who is kidnapped by aliens and forced to fight in an increasingly punishing arena, which was historical and bloodthirsty, and also The Mind Of Wolfie Smith; a bizarre tale of E.S.P and mind powers drawn by the amazing Jesus Redondo (whose art actually used to give me nightmares!)

There were other titles which didn’t even have the dubious honor of sharing the cover for a short spell, while still donating the best they had to offer. Basically, by 1985 all the very best writers and artists in British comics were working under one roof, and it was truly glorious. It was a renaissance, a revolution, a re-invention.

They pioneered the mega-epic; stories that took a whole year to unfold. They began doing crossover stories between mainstay characters, stories that jumped between three strips, even beginning new stories with new characters that were then revealed to be existing characters that had been hideously disfigured or the like. Maverick, unprecedented methods of storytelling, and always consistently high grade writing and artwork. Pure heaven. And then something really amazing happened.