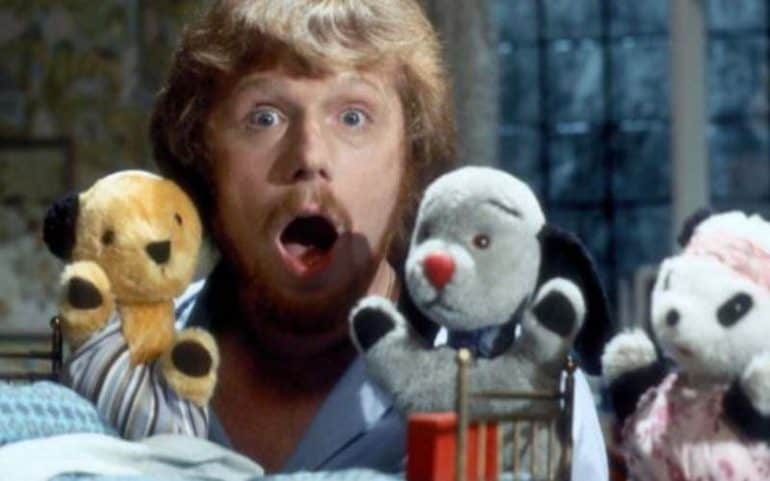 The Sooty Show – Looking Back At The Classic Kids TV Series

If you were born any time after the 1950’s you will no doubt be aware of The Sooty Show.

The little Yellow glove puppet bear stole the hearts of many a generation.

With his cheeky nature and magic wand Sooty was a staple amongst all the cartoons on the kids TV and still is today.

Despite its longevity there is one particular incarnation that we all remember fondly and that is The Sooty show.

The Sooty Show started way back in 1952 and was created by Harry Corbett after he received the puppet as a gift from his uncle Harry Ramsden, yes the Chip Shop owner.

When Harry retired in 1976 his son Matthew Corbett took over presenting duties and totally revamped the format.

He changed the show into a sit-com based episodic show and this version catapulted Sooty into stardom in an era full of puppets.

What Happened On The Sooty Show?

The Sooty Show followed the titular Sooty and his day to day life with his friends Sweep and Soo.

They all lived in a big house with father figure Matthew who was constantly having to keep them in line and usually failed miserably.

They would all get themselves into all sorts of mischief as they attempted new things or tried to solve a problem they had encountered.

The show revolved around the unique traits of its main 4 characters, each complimenting the other perfectly.

Sooty – We all know Sooty, the little yellow bear and main focus of the show.

He was a mute character who would communicate by whispering in Matthew’s ear or emoting with his hands.

He was an expert Magician who, with the help of his magic wand could do absolutely anything.

Sooty was depicted as being a very sensitive and caring bear, always helping his friends and occasionally causing mischief as he tried.

Sweep – The little grey dog who was Sooty’s best friend.  Sweep was depicted as being a bit lacking in common sense and he would always get things wrong.

This would often get him in trouble that the others would have to fix. His clumsy nature made him relatable and he was always the comedy relief that made the show what it was.

Sweep also had a superhero alter ego known as Superdog. His signature squeak was often emulated in the playground.

Soo – very much a mother figure to Sooty and Sweep and often a voice of reason to Matthew as well.

Soo was a little Panda who kept the boys in check and was often the only person in the house who knew what was going on.

Matthew – The only human in the house Matthew was essentially their father and it would always fall to him to teach them life lessons and tell them off if they did something wrong.

He became a comedy foil to the others as it would usually be him that came off worse in their schemes and pranks.

He came across as cocky and arrogant but would always do the right thing in the end, often just a victim of his desire to set a good example for the others.

Whilst most of the action took place between the four main characters there were plenty of guests both human and puppet.

A recurring character was Sooty’s nephew Little Cousin Scampi, a very naughty bear who would always get the others in trouble and eventually himself. Who can forget him being caught with matches.

Other notable human guests included iron Maiden drummer Nicko McBrain who came to help them learn about drumming for a talent show at the village hall.

June Whitfield starred as Matthew’s Auntie in one episode, Spike Milligan got on the wrong end of some cream cakes and Dennis Taylor joined them for a games day.

The Sooty show will always hold a special place in our hearts. It taught us the importance of kindness and how to have fun with friends.

We fondly remember our favourite episodes, like when the gang thought they were being burgled and it turned out to be Sweep sleep eating.

Other episodes that stand out include the episode where Sooty goes fishing to try and beat Matthew’s prize catch, When Sooty joined the Royal Artillery Motorcycle Display Team or when they all have to take a bath.

Admittedly after going back and re-watching some of these classic episodes they do seem a bit dated, especially the way that they speak to each other or some of the more traditional stereotypes that are portrayed but it doesn’t really spoil it.

This was the 80’s after all so you cant expect it to have the same values as today’s society.

What The Sooty Show does have though is a warm heart and love and has heaps of fun that is still enjoyable to watch.

The show was later taken over by Richard Cadell who brought back The Sooty Show to a new generation and with that the show is the longest running kids TV show, over 70 years running and is even in the Guinness Book of Records to prove it too which is testament to its ongoing appeal to kids from all generations.

We certainly love the fact that we grew up with Sooty in our lives and wouldn’t have it any other way. Would you?