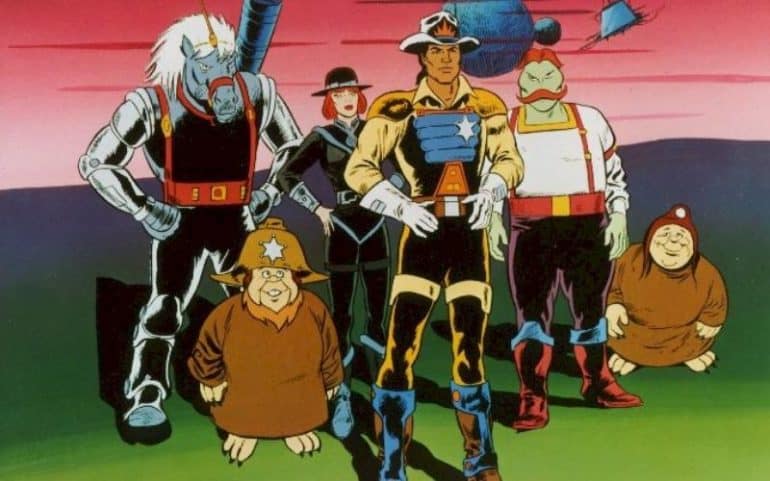 BraveStarr: Looking Back at The Awesome 80’s Cartoon

The happiest days of my childhood were in the mid-eighties.

I was ten years old, and it was a time of golden summers, never-ending days and awesome cartoons.

It was a time of bellowing ‘Strength of the bear!’ in your mates ear before delivering a haymaker punch to his arm.

A time of whispering ‘Ears of the wolf’ to alert someone of an enemy creeping up behind, before screaming ‘speed of the Puma!’ and pelting away at top speed. A time, in short, of BraveStarr!

This filmation classic was pretty hardcore for its time, though all the episodes had a moral message at the end (as with all the filmation cartoons, He-Man, She-Ra, The Real Ghostbusters, Shazam! and tons more, yet in BraveStarr there was also a high level of violence and wait for it… actual deaths.

How Did Bravestarr Come To Our Screens?

BraveStarr actually began with a secondary character: Tex Hex, who was originally developed as a ghost in The Real Ghostbusters.

He was never used, because Lou Sheimer, the executive producer, found him fascinating and he asked Arthur Nadel, Filmation’s Vice President for Creative Affairs, and Art Director John Grusd to develop a science fiction Western around the character. Thus BraveStarr was born!

The whole feel of BraveStarr was always a little harder-edged than its contemporaries, tackling the subjects of extortion and racketeering of one stripe or another.

BraveStarr had the most fantastic cast as well, with a whole host of strange characters and races, all centred around the weird techno-frontier Western theme. My personal favourites include:

Thirty/Thirty – Marshall BraveStarr’s Deputy. An Equestroid, he is essentially a cyborg horse that can change form into a bipedal humanoid. With a laser-blunderbuss (called Sarah Jane) and a really bad attitude, he is my favourite cartoon character of all time.

Tex Hex – The classic ‘Man in Black’ cowboy villain. A lavender-skinned gang boss with some truly bizarre characters in his gang. The names say it all really: Billy the Droid, Cactus Head, Hawgtie, Skuzz, Vipra and Thunder-Stick amongst others.

Stampede – An utterly bizarre, half skeletal Broncosaur (apparently the last of his kind). He brought Tex Hex back to life and gave him powers, and is also the arch-enemy of Brave Starr’s mentor and the source of his powers, Shaman.

Handlebar – A big, green alien bartender with a huge orange moustache. He serves ‘Sweetwater’, a drink of uncertain properties in the Fort Kerium saloon. Talks with a Brooklyn accent, another layer of weird in this crazy cartoon.

When you add in the extra richness of many different types of aliens, like the Kang (green-skinned cat-like baddies that all have strong German accents!), the Prairie People (indigenous to New Texas, and that look like little, buck-toothed mole-type creatures), Fuufta (pacifist Amish sheep/lamb analogues), Solacows, porcinoids, Apecats and Avionoids (both of which are exactly as you would imagine them) you can see how that diversity propels Brave Starr up into a very rare quality of excellence.

Oh, we should also make note of the strong vein of American Indian mysticism that runs all the way through the series, with the influence of BraveStarr’s mentor Shaman taking him on ‘spirit journeys’ with the aid of highly questionable herbs and whatnot. In retrospect, I have no idea how they got some of it past the censors.

All in all, Brave Starr is a unique gem of a cartoon. A bona fide steampunk classic, before there even was such a thing. With it’s genre mash-up of Sci-Fi and Western Lo-Fi, it’s safe to say that it is entirely unlike anything that has been made before or since.

If you’ve never seen BraveStarr, and you loved He-Man, I reckon it’s easily twenty times better. To watch it is to love it. Go and watch it right now, your life will be enriched for the experience.