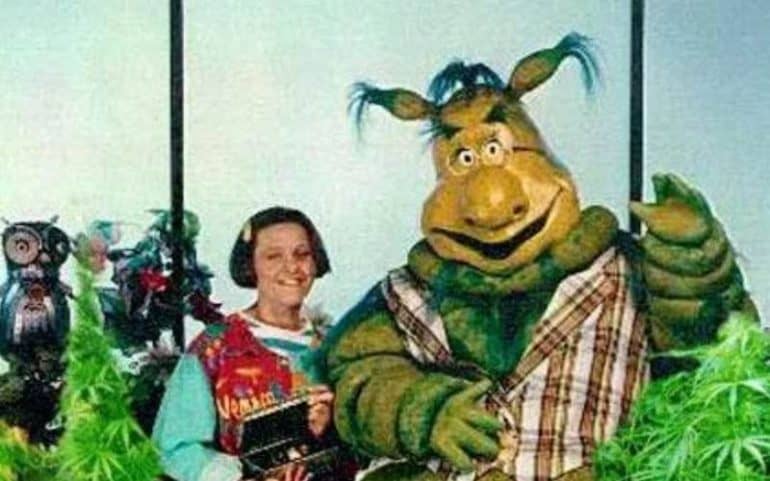 If you were at school in the late 80s and early 90s you will no doubt have rushed home at the end of the day and switched on CBBC or CITV, waiting for your favourite shows.

Whilst most of those shows will have been your typical muscles and guns cartoons like He-Man, Thundercats or Bucky O’Hare there were other, more wholesome, shows that we loved as well.

Now, a lot of people may not remember Greenclaws by name but will no doubt remember by the time they’ve finished reading.

Greenclaws ran between 1989 and 1990 on BBC2 at lunchtimes although it was repeated several times throughout the early 90’s on CBBC.

Who were the characters?

Greenclaws – The title character was a big green Monster who spent his time gardening in a big greenhouse.  He grew magical plants that would often help out with various situations.

Iris – A girl that used to visit Greenclaws to hear his stories and to help with his gardening.

Owlma – A mechanical owl that would tell riddles to Greenclaws and Iris which allowed them to find out each episodes theme.

Percy – Greenclaws’ pet Macaw who would join them for their stories.

The Riddle Tree – Perhaps not really a character as such but an important part of the show none the less. The Riddle Tree grew Greenclaws’ magical seeds and was also a home to Owlma.

This Is Ringing A Bell But What Was Greenclaws About?

In each episode Iris would come to visit the greenhouse and they would plant hislatest seed creation.

The seeds often looked like giant Easter eggs and would be highly decorated.

They would plant the seeds and place them inside the Riddle Tree until they had grown.

Once the seeds had grown Owlma would ask them a riddle in her own language, called Owlmaese, which usually consisted of her saying Twoo Twoo Twit Twit Twoo.

Iris would then translate the riddle for Greenclaws who couldn’t speak the language.

If they answered the riddle correctly, which they always did of course, then they could take the new plant from the tree.

The plant would always be growing some bizarre fruit that would give hint towards this week’s story.

Things such as trumpets, cricket balls and swimming arm bands could be growing on them, always to the surprise of Greenclaws and Iris.

Greenclaws would then sit down with iris and Percy to tell a story about his family that was linked to the plant.

The stories would be accompanied with animation whilst Greenclaws narrated. In addition to the animation there was a lip-synced song in every episode too.

Greenclaws was written by Ursula Jones and was produced by Christine Hewitt, who would go on to Produce Bodger & Badger (Mash Potato!) for many years.

Now Greenclaws was certainly a bit twee and was by no means the coolest programme on TV.

It was aimed at the preschool market rather than the older kids, but that doesn’t mean we don’t have a huge amount of affection for it.

It’s the sort of show that just wouldn’t be made anymore and is very much a throw back to when childhood still had its innocence fully intact and that makes it all the more memorable for it.

We hope you’ve enjoyed this throw back to your early years as much as we enjoyed getting to know this old classic again.

There seems to be plenty of old episodes on YouTube for you to check out too and maybe show your kids what you used to watch.

What do you remember about Greenclaws?