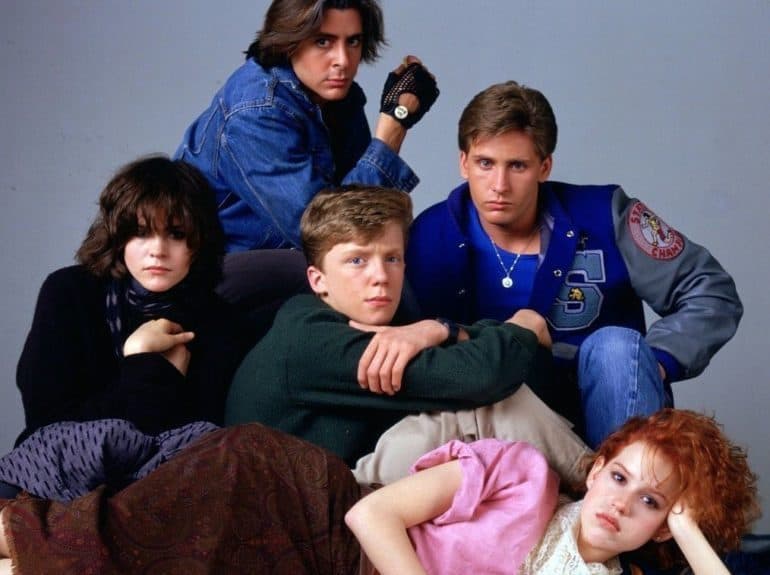 The Breakfast Club is Still an Amazing Movie – Here’s Why!

Not only does The Breakfast Club show us what happens when teenagers are forced into socially awkward situations, but it also thrusts you into reality with a shocked expression.

The film starts with a quote that quickly makes you realise this is no average cute, romantic high school story

that you spit on

as they try to change their words

are immune to your consultations.

of what they’re going through…”

The film is overall very minimalistic, with only a handful of characters. The set, which for the most part we only see the library of Schermer High School.

We are introduced to the characters straight away when they arrive at school. We automatically assume we know them because they fall into cliché stereotypes; athletes are good looking, introverts have psychological problems, a tough kid that has things going on at home and the nerd who always gets an ‘A’.

As a viewer we are put into the same situation as the kids, meeting each other for the first time and forming your first opinions on them. John Bender is the stereotypical tough kid who has a hard shell.

He is the stereotypical naughty kid stealing someone’s lunch money, setting off the fire alarm or breaking a window, we all had one at school. It doesn’t take long for Bender to cause problems within the group.

Not long after Clark mentions to Bender that he’s so insignificant that it’s like ‘he doesn’t even count” that “he could just disappear and nobody would care”. Bender, like he does with everything, shrugs it off and keeps making jokes at other people’s expenses. Much later in the film the group sit down and have a meaningful conversation, Bender seems to be accepted until he reminds the group “hey, remember – ‘I don’t even count’. I could just disappear and no one would notice”. Y

ou watch it play out as the teenagers around him realise they are all somehow the same, that they all have feelings.

Prepare yourself, throughout the film nerve endings will be touched and we will see beneath the surface of each teen.

We’ve all experienced walking down a hallway when you shouldn’t be. This is what the group experiences, they all work together to retrieve something from a locker. It’s a very fun scene but it’s also quite eye opening, these kids are now working together, even covering for each other.

It could be argued that they found a common enemy, but we hope it’s because they have realised they’re all just kids going through the same stuff.

This film is no average sweet high school movie with a happy go lucky ending. If you have watched this movie you will know what I’m talking about (if you haven’t, what are you doing?), the group all open their hearts to one another with some pretty heavy and personal information.

Bender has an abusive father.

Andrew is finding the pressure from his peers difficult, peaking at physical abuse from class members.

Claire has it pretty easy compared to the rest of the bunch but her pressure is of a different kind.

Brian contemplated suicide after ruining his grade point average, although we learn that the gun was only a flare fun, the pressure he speaks of is very real and somewhat chilling.

Alison’s story however is the most tragic.

You may have noticed how she doesn’t speak for the first half an hour of the movie? She appears to be neglected, hopping out of the back seat (not like the other kids in the front seat), unable to share, having a hard time articulating her thoughts. Whatever the reason is she has some deep issues.

What is also miserable is that despite having a great time bonding and learning about one another, when Brian asks the group if they will be friends after this day, everyone seems unable to answer his question. Some more than others because they worry “what they might think”.

The Breakfast Club is funny, very funny at times. The relationships between the teenagers are great and that’s without mentioning how a lot of the film is ad-libbed.

Although The Breakfast Club mentions psychological questions about teenagers and adults, group clichés, class and finance,.

It’s a still a fantastic movie. It’s a realization that despite our differences we can sit and talk them out, eventually we will probably have a lot more in common than we originally thought.

Are you a Breakfast Club fan? What you’re favourite moment from the movie?