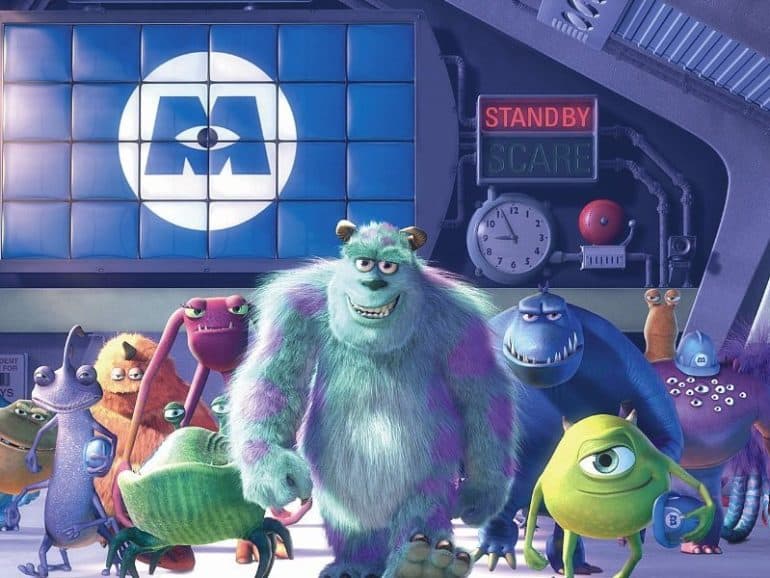 By Poppy Carter
In CultureMovies
on October 5, 20173 min read

Pixar’s 2001 hit film Monsters Inc introduced us to Sully, Mike and Boo and like most animated movies the world fell in love with the awesome characters from the film.

Monsters Inc was something new, it works because it has all the elements that a good animated movie should have. It’s funny not just for the kids but for adults too and pulls at your heartstrings every now and then which is a great formula for any family movie. It really is just one of those films that you never get bored of watching.

Monstropolis is inhabited by monsters and their town is powered by children’s screams, which is Sully and Mikes job as ‘Scarers’ to collect. They do this by slipping into children’s bedrooms via the closet door and scaring the half asleep kids. At Monsters, Inc their slogan is “We scare because we care”. The town however, is suffering from a scream shortage, as children aren’t scared as easily anymore.

Seeing Sully (John Goodman) a big blue furry giant, and Mike (Bill Crystal) a green ball with one massive eye somehow supported by stick thin legs, on the big screen is relatable for a number of reasons. You just can’t help seeing their stages of relationship reflect in you and your close friends. From being enemies (ok maybe we didn’t all start here), learning to work together and putting all differences aside, to having each other’s backs and having a good laugh.

What the children cease to know is that the monsters are just as scared of them, as the children are of the monsters. Anything from the human world is considered ‘contaminated’. When one unobservant monster, George Sanderson, returns from a scare mission with a sock on his back he finds himself completely surrounded by the contamination team, a group that will go to all lengths to keep Monstropolis safe. When Boo ends up in Monstropolis you can start to picture the panic that erupts.

Boo is the cutest most adorable child you will ever meet, wait until you hear her scream “Mike Shushowski! Mike Shushowski!”.  Boo was voiced by Mary Gibbs, who at the time was just two and half, to say the least she had a pretty hard time sitting still. The studio ended up following her around with a microphone, which means not only is her voice authentic but so are all of her movements. In one scene you can see Boo in bed drawing, the paper has the name ‘Mary’ scribbled all over it, the detail in this film is real.

‘Put that thing back where it came from or so help me’, yes you know the song. Monsters Inc is made for children and adults, with so many sneaky inside jokes and references that we just can’t wait to share them when we spot one. I’ll let you in on a few; they live in Monstropolis and their favourite restaurant is “HARRYHAUSEN’S”, named after Harry Hausen, who is a special effects artist known for creating monsters.

The CGI, considering this was back in 2001, and attention to detail is crazy. Sully had 2,320,413 strands of hair. To create the desired intricate depth Pixar decided to create every hair individually, meaning they could spend up to 12 hours per frame to make Sully perfect.

There are also great gags included in Monsters Inc that need to be watched out for, like a monster janitor who leaves a trail of slime after he’s mopped up. Big or small the detail is everywhere.

Monsters Inc. is a great watch no matter who or how old you are; however different ages will view it very differently. Adults enjoy the humour, teenagers find it silly, it’s just fun and games for a tween and it may be scary for a 5-year-old. It will either make them more fearful or cure them of fright.

Monsters Inc’s story sets a bottom line, you shouldn’t be scared of what’s in the dark… or your closet. Imagination is great but don’t scare yourself.  It’s ironic for a film all about an energy shortage to be so full of energy, that is nothing but fast paced fun.

So next time you’re looking for something fun and easy to watch, don’t forget that Monsters Inc is one of those movies that will entertain throughout.

Next up: Looking back at the original Toy Story movie from 1996